Catherine Langabeer, a member of the Barbican Sustainability Group before her recent return to New Zealand, talks us through some of the sustainability issues related to food and uses Marianne Christensen’s Geranium shop below Lauderdale Tower as an example of shopping for sustainable food items.

When out food shopping, “doing your bit” for sustainability is often seen as a matter of carrying a reusable bag. However, by far the bigger sustainability challenge is represented by what is inside the bag, the food itself. National Geographic launched its special series on the future of food with the startling revelation that agriculture globally produces more greenhouse gases than all the cars, trucks, trains and planes on the planet combined. When you add to climate change impacts other pressures including growing water scarcity, pollution and the demands of feeding a global population of 9 billion by 2050 the picture can look very challenging indeed. If everyone lived like we do in the UK we would need the resources of 3 planets to sustain us – and a lot of it is down to how we eat.

Put this way, these problems can seem abstract or remote. But recently we have seen global food issues brought closer to home. After decades of food prices getting ever cheaper, in recent years prices have been more volatile. Food price inflation in the UK has increased in double digits while in poorer countries it has contributed to political unrest. In a global market for food commodities, as we import more, we are more vulnerable to global price shocks.

Food security has also become a hot topic. So too, after the horsemeat scandal of early 2013, has food safety. Some have argued that the horsemeat scandal was the logical outcome of supermarkets pushing their suppliers to provide very cheap meat. Supermarkets are certainly convenient and our wallets have benefited from their economies of scale: in the UK in the 1950s, food cost 30 percent of a weekly wage. Today, it is about a tenth. But when food is cheap because we are cutting corners on food safety or quality, or polluting the environment for the next generation to clean up, that cheapness starts to look a little more costly.

So what can the humble food shopper do about these very complex issues? While a few of us might fantasise about leading “The Good Life” courtesy of a Barbican allotment (or two!), most of us will continue to buy in our sustenance. And that is no bad thing: unlike buying those energy saving light bulbs that last five years or more, food shopping presents a regular opportunity to make a positive and sustainable difference while enjoying the small pleasures that food brings. 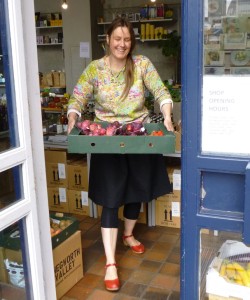 Marianne Christensen in the Geranium doorway

To explore these issues, I spoke to Marianne Christiansen, Barbican resident and owner of the Barbican shop Geranium, who – as well as running a welcoming, convenient and unique local shop for residents – stocks her shelves with sustainability in mind. To make Geranium financially sustainable it was important to differentiate it from the local supermarkets and convenience stores, so while those “last minute” basics are available, Geranium has plenty of products that you won’t easily see elsewhere, including probably the most local products ever: Italian breadsticks and blackberry friands made by Barbican residents.

“Local” is of course one of the buzzwords for people interested in sustainable food. But people think local is important for different reasons and local can mean many different things. For some, it might mean produce grown within the M25. In the USA, a product can be called local if it was made within the state, which might be bigger than the UK!

The environmental rationale has generally been that buying produce closer to home cuts down on “food miles” and the energy consumed and carbon emissions produced by transporting food those distances. A good example of a local supplier is Geranium’s pastries supplier, The Little Bread Pedlar, which operates out of a bakery in Bermondsey, and delivers to lucky central London cafés and shops by bicycle (helping London’s air quality while they pedal). Of course, the “local” label becomes more complex when you look at the ingredients – they use English flour but French butter and chocolate. And those cocoa beans sure weren’t grown in France. 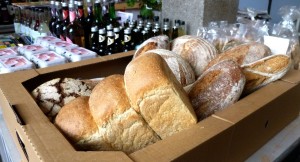 But here is an important point about the limits of buying “local”. Some parts of the world are generally better for growing certain things than others and we benefit from importing them rather than, say, trying to grow cocoa beans in energy intensive greenhouses in Britain.

The food writer  Jay Rayner’s(see accompanying interview) insightful and irreverent book “A Greedy Man in a Hungry World” points out that food transportation contributes a very small part of the overall environmental impact of the food we eat: between 2 and 4 percent. This means that for him, buying British apples in season and shipped New Zealand apples when British apples have run their course is ok. Although he has reservations about asparagus flown in from Peru and flying perishables around the world still seems a waste of fuel to me as well.

Buying food from abroad can also mean supporting other, often poorer, economies that trade with Britain. The Zaytoun range of products at Geranium provides an example. Zaytoun supplies products from Palestine, such as dates, spices and olive oil, enabling the farmers to make a living despite the ongoing conflict which often prevents Palestinian farmers accessing their orchards and fields. Zaytoun olive oil was the first to be Fair Trade certified worldwide. 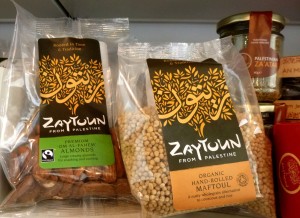 All this doesn’t mean we should give up on buying local – or at least British. Because buying British is important for our economic sustainability. One of Rayner’s chief criticisms of supermarkets (he praises them too) is that they generally don’t pay farmers enough, and when this sends farmers out of business or prevents investment, it reduces Britain’s future capacity to feed itself. Buying locally is a great way to connect to our communities, keeping money circulating there and supporting independent businesses. By working with so many independent suppliers (20 at the last count providing nearly 600 products), Geranium contributes to this. It also contributes to the Barbican community by providing another place where residents can meet and get to know each other. Marianne is able to provide a level of personal service that most supermarkets can’t, such as by getting in products that residents request, or offering to cut half a loaf of bread for residents who couldn’t eat a whole one before it went stale.

This last small gesture can help shoppers reduce the amount of food they might waste. And wasting less food is one of the most significant things we can do to make our food habits more sustainable. WRAP, the government’s waste advisory body, reports that the average British family throws away the equivalent of 24 meals a month. That’s money down the drain (or Garchey) as well as a waste of all the resources that went into producing the food.

Supermarkets also have a role to play here: in the first 6 months of 2013 Tesco wasted almost 30,000 tonnes of food in their shops and supply chain, including 21 percent of fruit and veg and 41 percent of bakery items. Here again, independent shops like Geranium can show the way. Marianne gets her fruit and veg from Chegworth Valley, a farm based in Kent. The farm used to supply supermarkets but felt that their focus on perfectly sized and shaped produce came at the expense of taste and quality. So, Chegworth Valley started selling to independent shops like Geranium instead. 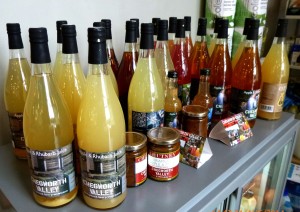 Some of the Chegworth range of products at Geranium

Chegworth are also organic – along with a number of the other suppliers to Geranium such as the Luscombe drinks, Seed & Bean chocolate and Ivy House Farm Dairy. Organic food appeals for being largely fertilizer and pesticide free. But the biggest benefit organic food brings is not to human health but to maintaining the health of the soil and surrounding wildlife. That said, when expert commentators talk about the challenge of feeding the world in the future they know it won’t happen just with more small organic farms: both conventional and organic systems need to learn from each other so that we can have food production which doesn’t deplete our natural resources but is also productive at a large scale. So that’s why I buy from supermarkets too.

A final important consideration for eating sustainably is something that is not much discussed, it’s “the cow in the room”: cutting back on the amount of meat that we eat. Alex Renton’s short book “Planet Carnivore” spells out the issues clearly and even-temperedly (he isn’t a vegetarian on a mission!).

A major reason meat is such a challenge is that it takes a lot more resources to produce than the vegetables, grains and fruit the land could otherwise be used for. The UN Food and Agriculture Organisation reports that 80% of total global agricultural land is used to produce feed for animals (60% for beef alone).

Of course animals can do a great job of turning things we don’t eat (grass, swill) into high quality protein. But much of the meat produced these days isn’t made that way. Red meat is the most “wasteful” in this sense – simply changing a meal a week from red meat to white meat would already make a difference as well as helping our health. The average Briton consumes just shy of 90kg of meat per year. One commentator suggests the Japanese average of 15-30kg would be about right in terms of the capacity of the planet’s resources to provide meat for everyone who wants it.

As you can see, the business of eating sustainably is not just the mantra of eating local, seasonal and organic. It is also about buying British, supporting independent businesses, putting pressure on supermarkets to up their game, wasting less food through how we buy, cook and eat, and cutting back on the meat. Above all, it’s about taking an interest in the stories behind the food in that shopping bag, plastic or not. And having a local friendly shop with a knowledgeable owner like Marianne could be a good place to start.

Catherine Langabeer, is an environmental consultant for the creative industries and a member of  the BA Sustainability  Group (BASG) before her recent return New Zealand. If you would like to join the BASG or learn more about what they do please contact ba_sustainability@btinternet.com