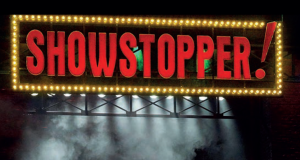 The West End will welcome a record number of new British musicals this autumn, thanks to the world’s first major season for an improvised musical.
Showstopper! The Improvised Musical plays its first full West End run, for a limited 10-week engagement. Eighty brand new musicals will grace the stage of the Apollo Theatre, each created on the spot by incredible, multi award-winning musical comedy improvisers The Showstoppers. Audience suggestions are transformed instantly into all-singing, all-dancing shows with unpredictable and hilarious results.

Fast, funny and entertaining, the team nightly pull off something incredibly ambitious. They create a real musical from scratch, not just an impro night with songs but a full story with stories and characters you can care about, a live band of incredible musicians, and spontaneous but seamless choreography. With a BBC Radio Four series and eight years of festivals and touring to their name, The Showstoppers have delighted and astounded audiences around the world with their ingenious, unique blend of comedy, musical theatre and spontaneity.
Highlights from previous shows have included Emotional Baggage (an apt title for a tale of First Class romance at Heathrow Airport, with songs in the style of Sondheim and Abba), Sweeney Cod (in which an ambitious fish and chip shop owner falls victim to unrequited love, with a touch of Kander and Ebb alongside the pineapple fritters), and To Bleed Or Not To Bleed (a high-stakes opera of communist vampires, channelling Mel Brooks and featuring an undead chorus).
‘Jaw-dropping. All the big-hit mega-musicals inspire an audience to want to see them more than once. And I’d see Showstopper! again tomorrow.’
– Dominic Maxwell, The Times