The Old Street Roundabout, close to the Barbican and nowadays often referred to as ‘Silicon Roundabout’, contributed many years ago to the development of “The Cloud”. The story is amusing, and relevant to the future of technology-based industry in London. Barbican resident Keith Clarke explains.

In 1969 the building to the northwest of the Old Street roundabout housed the unit then responsible for buying Government computers. I appraised computers that were accessed remotely, then called “time sharing services”. Initially the networks were simple enough to be drawn in full. Later they became complex and were represented symbolically by fluffy clouds, hence today’s terminology. 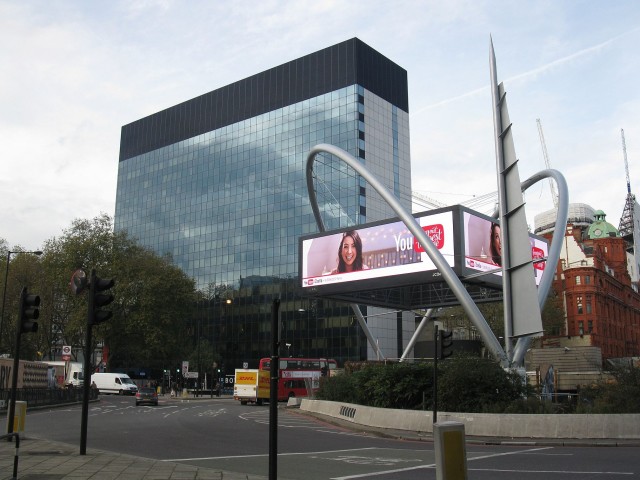 207 Old St. where early research that led eventually to “The Cloud” was carried out.

Each terminal was connected to just one computer by a dedicated telephone line. I demonstrated that the then new ASCII code allowed a user of the public telephone network to access many computers, and I presented a paper on this.  The meeting was chaired by computer pioneer Dr. J.M. Pinkerton, and he opined that the idea of “free swimming terminals, not permanently connected to any one computer” had potential. How right he was!

This came to the attention of a Government Minister, Dr. Jeremy Bray, who wanted to access economic models. However, the idea of a Minister using computers appalled his senior civil servants, who, in true “Yes Minister” style, tried to prevent it.

They first inspected the terminal, plainly understanding little of its uses. Then one declared that they must inspect the toilets for suitability before Dr. Bray could work in the building.  The Gents, although not very attractive, could not be considered a hazard to the Minister’s health or dignity, so they reluctantly agreed to the visit. Dr. Bray worked at 207 Old Street. that evening.

Their actions were absurd, but the Civil Servants had a motive.  Prime Minister Harold Wilson was the last before David Cameron to vigorously promote what we now call the STEM (Science, Technology, Engineering and Mathematics) based industries. Scientist and novelist C P Snow was also a Minister. He argued that more scientists were needed in Government and the Civil Service. This case is being made again today, but then the idea was seen as threatening by the mandarins. If Dr. Bray set the precedent that Ministers could use computers “hands on”, it would not be long before they were expected to do the same, and they did not relish the thought.

So what is the future of ‘Silicon Roundabout’? The growth of high tech companies locally is both encouraging and to be encouraged, but we must treat the claim that London is about to overtake the original “Silicon Valley” with caution. It has been hoped at various times that theM4/M40 corridor, Silicon Glen (Scotland), Silicon Gorge (Bristol), Silicon Fen (Cambridge) and the A14/A12 between Cambridge and  Suffolk would all generate similar wealth, but only the Cambridge Science Park has developed into a centre of national significance. In part this is due to the promiscuous use of the word “silicon”.

When I managed a laboratory in Santa Clara it was clear that the wealth created there derived from a combination of both hardware and software developments. I cannot see   Islington planners granting permission for an integrated circuit fabrication plant near the roundabout, and I doubt if Barbican residents would want them to, because of the chemicals involved. Moreover, too great a focus on one roundabout could be counterproductive.

Recently a Shoreditch entrepreneur complained on the radio that the “Tech City” developments at Stratford will dilute London’s attractiveness to high tech companies, a misguided view reminiscent of the time when the City of London argued that the building of Canary Wharf would hinder its ambition to make London a global financial centre.

The sensible focus for achieving critical mass in London is the area that includes Stratford, Shoreditch, Clerkenwell, City University,  Bloomsbury (home to several University of London colleges and postgraduate Institutions) and  the  new Crick Institute. It continues Westwards to include Imperial College (the editor’s alma mater and recently rated as the World’s No. 2 university after MIT and equal with Cambridge) and its new business park, and Brunel University. 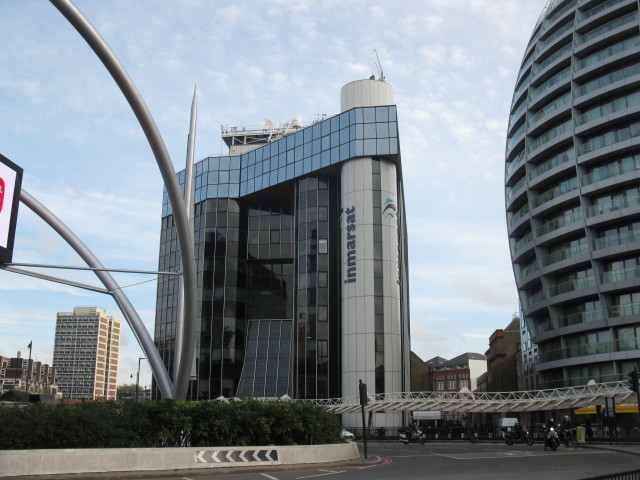 The Inmarsat building on ‘Silicon Roundabout’

Interestingly an important IT company, Inmarsat, also stands directly on the roundabout but was for a long time overlooked by journalists focussing only on new start up companies and this only changed when Inmarsat played a leading role in the search for Malaysia Airlines MH370.

If planners concentrate on the area described above by ensuring that affordable business space with good broadband connections is available to small IT businesses, then ‘Silicon Roundabout’ will continue to thrive (even if misnamed), and Clerkenwell and Shoreditch will continue to be vibrant and attractive neighbours to the Barbican. Perhaps more importantly, London could help the UK to regain the capability that existed in the 1960s, when we designed, manufactured and exported  not only applications software, but complete computer systems as well.