Something different – Armenian/Russian cuisine at Erebuni

Something different – Armenian/Russian cuisine at Erebuni

Just a short walk from the Barbican – indeed directly visible from some apartments in John Trundle Court – in Carthusian Street is the new Armenian/Russian restaurant named Erebuni after the ancient name for Yerevan, the capital of Armenia.  It is something of a labour of love for proprietors Edward and Nona Torossiants who had previously (for nearly 20 years) run a restaurant with the same name in Lancaster Gate until the building the restaurant was located in was scheduled for redevelopment and they had to find a new home.  Indeed Edward waxes nostalgically about some of the Russian and Armenian émigrés who would frequent his former restaurant and some of whom are already finding their way across London to his new one.  Indeed the old restaurant was used as one of the locations for the highly critically rated London Russian mafia film, Eastern Promises, and one can find pictures on the Erebuni website of Edward and Nona with Viggo Mortensen, David Cronenberg and other members of the film’s cast and direction.  As one of the very few restaurants serving authentic Russian and Armenian food in London it does tend to be on the go-to list for homesick Russians and Armenians and also for visitors from some of the now independent eastern European nations with similar cuisines 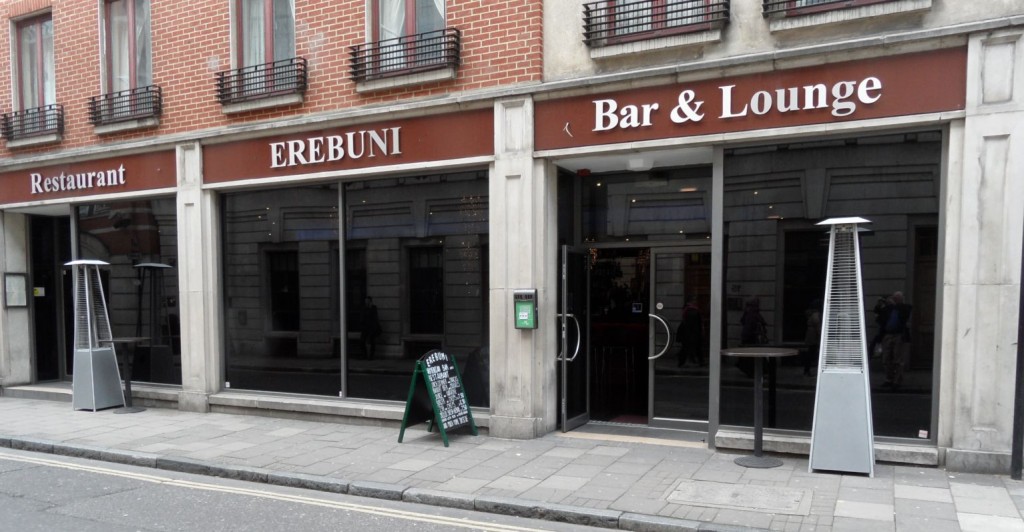 Exterior of Erebuni Restaurant, Bar and Lounge in Carthusian Street

Edward is Russian born but of Armenian descent while Nona is Armenian from Yerevan – and is also the main chef.  They took over what is a fairly large restaurant and bar space and redecorated it = perhaps a little dark and dominated by a long bar, but it does sound like an altogether better space than that occupied by their previous establishment which was, as i understand it, a basement restaurant with access through what was then a slightly run-down hotel.

The old Erebuni used to get very positive reviews about its food, even if Russian cuisine is not to everyone’s taste, although the Armenian – with some Georgian and Ukrainian – fare perhaps adds a few more southern European elements into the mix with some resemblances to Turkish and Greek food.  I have to admit my preliminary glance at the cold starters looked like my idea of food hell, but the menu is quite a large one and there was certainly plenty more there to catch my eye as looking much more to my taste.

Nonetheless we decided to put ourselves in Nona’s capable hands as far as food selection was concerned for a late lunch and even though she did come up with some items off the part of the menu which had worried me it all tasted very good.  We washed it down with a glass of Georgian wine and slightly salty sparkling Georgian mineral water which was fine.  It was all served with Russian and Armenian breads. 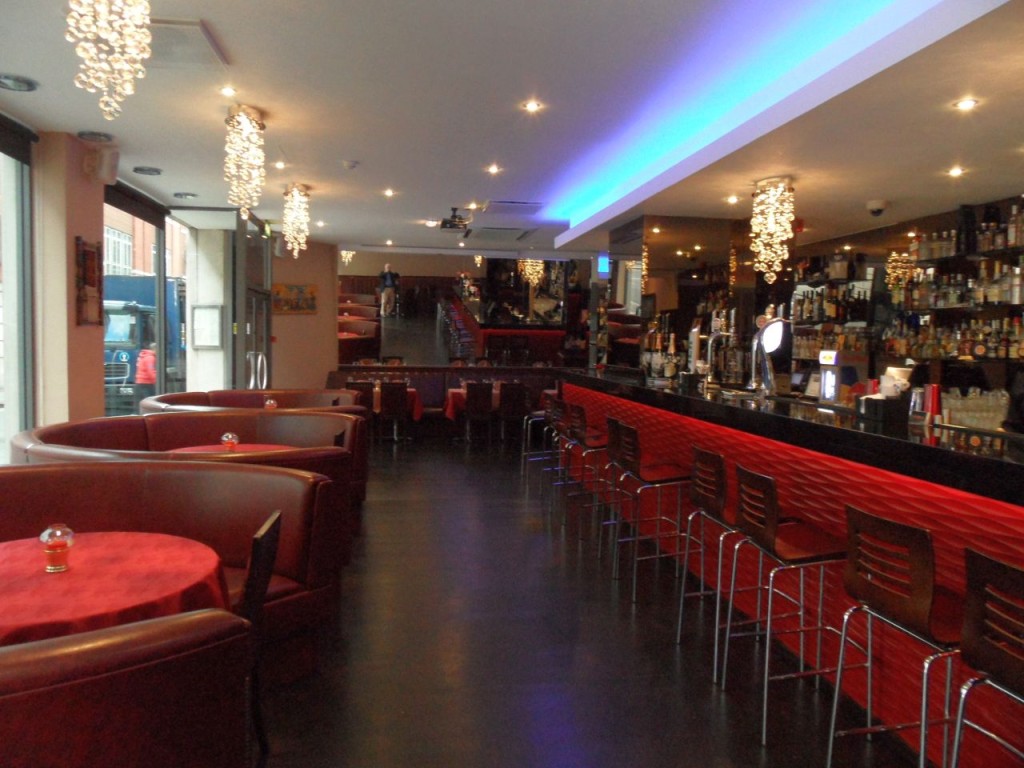 We had two different kinds of Russian salad (memories of something similar served in my schooldays were not pleasant) but Erebuni’s versions were fine.  The Baklajan – fried aubergines with walnuts, garlic, parsley and pomegranate was really good – and Nona insisted we should try her Borsh – a Ukrainian version of this purple coloured beef and beetroot broth with potatoes, cabbage and carrots.  I’d had borsh once before in the old East End specialist Jewish/East European kosher restaurant, Blooms of Whitechapel (closed down 18 years ago) and can’t say I was enamoured, but Nona’s version was something completely different and I’d certainly go back for more.

Nona also provided some more samples of the cuisine to try and give us a feel for other items on the menu.  We had the Julien with mushrooms – effectively a melted cheese dish with cream served in a small ramekin – tasty but difficult to get out of its container, and then a mixed helping of kebabs (lamb, pork and chicken – the restaurant serves about 11 different types of kebabs including sturgeon – a fish one won’t find on many restaurant menus in London).

By this time we were pretty full, but had an Armenian baklava pressed on us as dessert, made with Armenian pastry, nuts, honey and spices which was very good – and very sweet..

We ended with coffee and a liqueur courtesy of Edward  – altogether a very enjoyable late lunch.

With its Armenian and Russian roots Erebuni  has the kind of wine list it would be hard to find elsewhere with a selection of French, Spanish, Italian and New World wines as well as wines from Georgia and Moldova – and as for vodka, there are over 20 different varieties as well as most other spirits in a well stocked bar.

Downstairs is the flashily decorated smaller basement bar/lounge which would be ideal for parties of perhaps up to 100 people, although that would be a bit of a squash.  By all accounts it is a lively place particularly at weekend nights with karaoke. 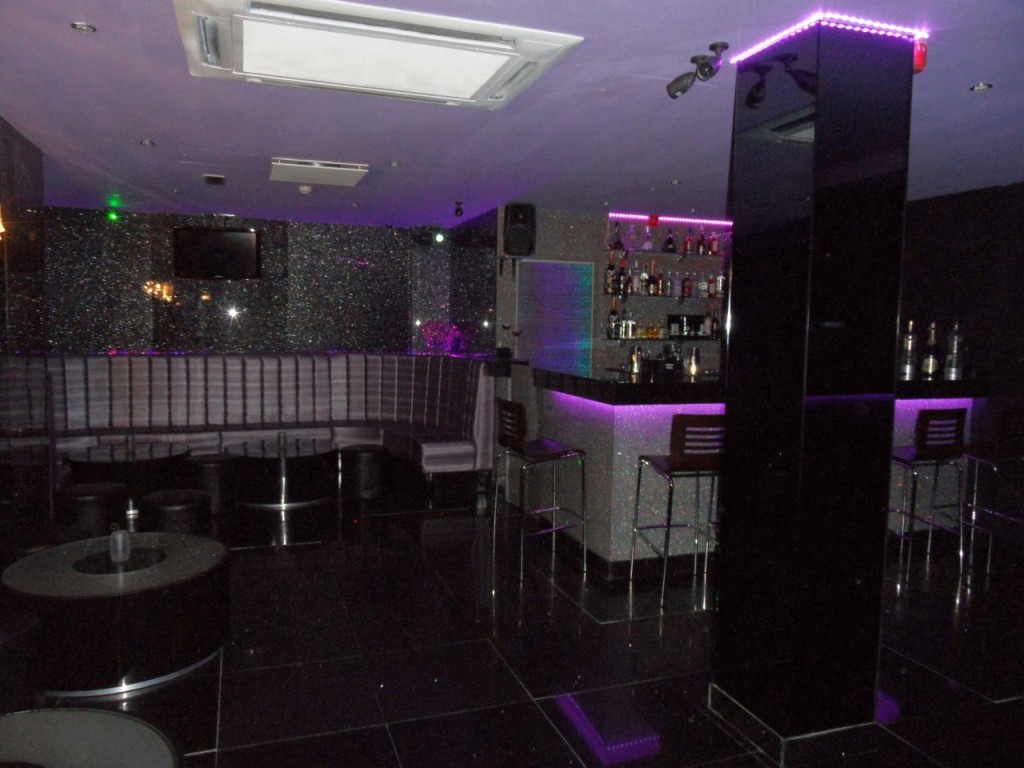 So Erebuni offers something completely different for diners in the area, or indeed probably for the whole of London.  Edward reckons it is perhaps the only restaurant in London serving authentic Armenian food, and one of the few serving Russian and other allied cuisines.  It would also be great for vegetarians as there is a biggish selection of vegetarian dishes on the menu.  It’s not cheap – but prices are pretty standard for the area.  Caviar would add to the costs of course, but the price of this seems quite reasonable in comparison with many other restaurants which serve the true Caucasian varieties.  One hopes that Edward and Nona can make their new Erebuni as successful as their prior one given perhaps the major proportion of the expatriate Russian/Armenian/Caucasus/East European community resides in west London, although there are undoubtedly a number in the east of the city – and perhaps even in the Barbican.