Cointreau and the South Place Hotel have announced their new autumn haven in the heart of East London, bringing the golden colours of the season to life with Autumn on the Terrace in partnership with Cointreau at South Place Hotel’s ground floor 3Bar, until late November. As the air gets chillier, warm up your senses with a selection of seasonal cocktails created using everyone’s favourite autumnal flavours – from classic, to sweet and spicy, there is sure to be a cocktail to see you through to the colder season. 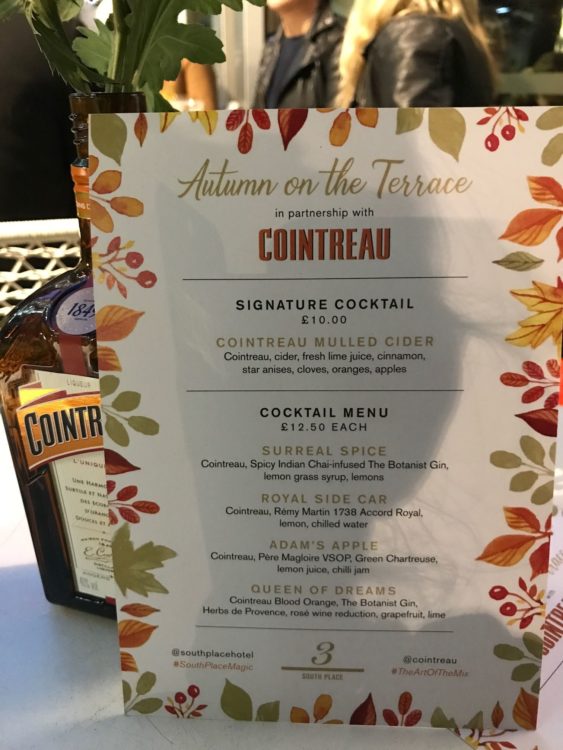 You are invited to drink special Cointreau cocktails in the heated, cosy space, and to truly master the Art of the Mix – bringing people and ingredients together, while the sights and smells of autumn spice fill the air. The unique and inviting terrace will also feature red and yellow decorative leaves embellishing miniature light fixtures throughout, bringing a true golden glow to the space, complete with decorative golden oranges, adding extraordinary sparkle and shine to the arched entrance way.

If you’re really feeling the chill from the autumn air after our scorcher of a summer, warm up with a Cointreau Mulled Cider, a warm spiked Cointreau cider made with Cointreau, fresh lime juice, cider, star anise, cloves and garnished with a cinnamon stick and thin slices of orange and apple (Highly recommended on an Autumn evening). If you like your cocktails to have a kick to them, do try the two featured seasoned sensations: the Surreal Spice, featuring Cointreau, Spicy Indian Chai-infused The Botanist Gin, lemongrass syrup and lemon, and the Adam’s Apple with Cointreau, Père Magliore VSOP, Green Chartreuse, and fresh lemon juice topped with a chilli jam.

If something sweet is more your style, try the Queen of Dreams, complete with Cointreau Blood Orange, The Botanist Gin, Herbs de Provence, and rosé wine reduction with grapefruit and lime, sure to hit that sweet spot in the autumn chill. If you like to keep your cocktails classic, you can also try a Royal Sidecar – complete with Cointreau, Rémy Martin 1738 Accord Royal, and freshly squeezed lemon.

Pop on down to the Cointreau Golden Orange Terrace at the South Place Hotel from October 22nd and bask in the autumnal vibes, with the cocktails starting at £10.00.

Cointreau was created by Edouard Cointreau in 1875 after noting consumers’ interest in the flavour of orange, a rare and expensive commodity at the time. He travelled the world and continuously experimented with recipes and distillation processes until he created the perfect blend. The clear liqueur was born out of the inspired idea to combine sweet and bitter orange peels. This particular blend gives Cointreau its unique and delicate taste, the perfect balance of sweetness and freshness. The Cointreau recipe is simple, natural, and unchanged since its creation. Its character and excellence lie in the rigorous selection and assembly of the orange peels, a meticulous task entrusted to Maison Cointreau’s Master Distiller.

The South Place Hotel, only a stone’s throw from the Barbican on the way to Liverpool Street station, is an 80-bedroom, luxury hotel in the City of London, just minutes away from Moorgate and Liverpool Street stations. It is the first hotel from the restaurateurs D&D London, with Conran-designed interiors, 2 restaurants (including the Michelin starred Angler), 3 bars and 5 private dining and meeting rooms.