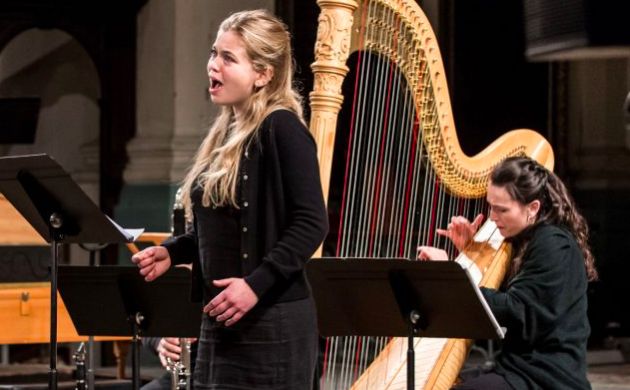 Three of Europe’s most exciting female classical artists are to come together to deliver a concert of music for voice and harp at 1-1.50pm on 20th July.

In a specially curated recital, the Official Harpist to HRH The Prince of Wales, Anne Denholm, who played at the wedding of the Duke and Duchess of Sussex just last month, will perform works by internationally-celebrated 20th and 21st-century women composers, all in the elegant surrounds of Drapers’ Hall. Denholm will be joined by soprano Héloïse Werner (‘extraordinary’ Classic FM) and mezzo-soprano Lucy Goddard (‘superb’ The Times), two of Europe’s most talented and exciting young classical artists.

The concert is part of the City of London Corporation’s ‘Women: Work and Power’, a six-month long season of 70 events celebrating women, both past and present. At just £4 in advance, the concert is very accessible to the public. www.cityoflondon.gov.uk/womenworkpower

At the age of 26, Anne Denholm is already one of the UK’s leading harpists and the official harpist to HRH the Prince of Wales (within the Royal Household). Having just performed at the wedding of the Duke and Duchess of Sussex, Denholm is interesting because she acknowledges the stereotypes the harp and harpists are often burdened with and naturally strongly refutes them. As well as freelancing with orchestras across England, Anne is also in demand as an interpreter and performer of new music.  She works with the Birmingham Contemporary Music Group and is a founding member of award-winning contemporary quartet, The Hermes Experiment, who regularly commission new works and arrangements for their unusual combination of instruments (clarinet, soprano voice, harp and double bass). She believes the harp has a central role to play in contemporary music from experimental classical, dubstep and popular music to cross-cultural collaborations and is involved in a number of community and educational projects.

Anne studied at the Junior Department of the Royal Welsh College of Music and Drama, the Purcell School and Cambridge University (Welsh students made up 1.6% of Cambridge’s intake in 2016) before doing her Master’s at the Royal Academy in London. She has also won innumerable prizes and scholarships. You can find out more about Anne here.

In 2000, Charles, Prince of Wales revived a tradition of having Welsh harpists, which was the first time the position has been occupied since it was last granted to John Thomas in 1871 by Queen Victoria.  The Prince restored the position in order to encourage young musical talent in Wales and the UK and to raise the profile of the harp as an instrument. The official harpist plays a £150,000 gold leap harp from harp maker Victor Salvi.