What has a light show on the other side of the world, however spectacular it may have been, got to do with the Barbican? Well, one of the artistic team responsible was Mark Maxwell, an artist and Barbican resident and who appears a number of times in one of the video clips linked below.  Mark was one of the key model makers involved in the conceptual work for the event, which drew huge crowds to watch the spectacular show projected onto one of the world’s most iconic buildings.

The light show project was undertaken by East London-headquartered 59 Productions which was commissioned byVivid LIVE festival to create the projected artwork for the sails of the Sydney Opera House, the city’s most visible public event.  Lighting the Sails ran every night from 23 May – 9 June 2014 from 6pm – midnight. 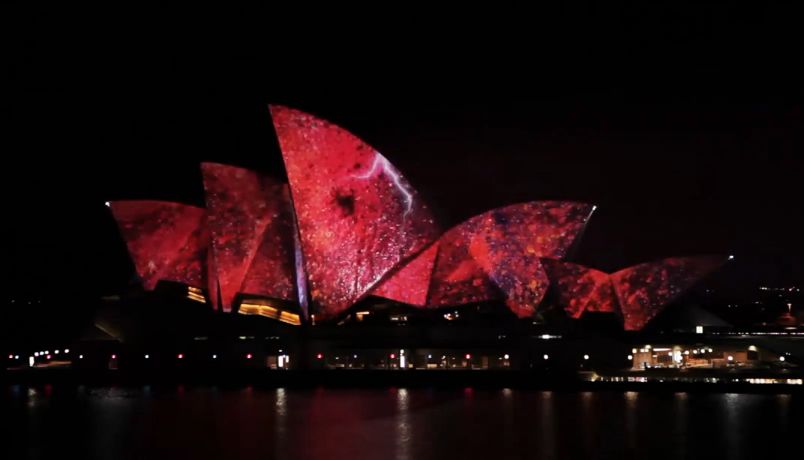 Lauded for developing “the most sophisticated use of film in the theatre to date” (Metro) and creating “an entirely new art form” (The Guardian), 59 Productions took the iconic building on a dramatic journey through time – from the birth of architecture and civilization through to the pinnacle of human and technological achievement.

Creative Director Leo Warner commented: “Our work has been watched live by audiences of over one and a half billion people, and we have faced challenges from animating the painterly works of master artists through to creating live films on stage. Sydney posed us an entirely new challenge: that of bringing an entire building to life, and making it stand out against one of the world’s most spectacular skylines.”

Fergus Linehan, Festival Director of Vivid LIVE at Sydney Opera House, added: “59 Productions is a company that is equally at home in theatres, galleries and arenas.  They bring to their work a sense of spectacle and showmanship but at the same time approach each project with rigor and sensitivity.  I’m hugely excited to see what they bring to the Lighting of the Sails in 2014.”

In the decade since their inception, 59 Productions’ work has included the Opening Ceremony of the 2012 Summer Olympics in London, the Broadway and West-End record-breaker War Horse, the international exhibition phenomenon David Bowie is, and the acclaimed Go Live world tour for Sigur Rós’ front-man Jónsi. Combining technology and art to tell amazing stories, the company followed these groundbreaking works with an ambitious new piece, writ large on one of the most distinctive architectural structures in the world.

The spectacular light show saw the Opera House born again, from its conception and design through the extraordinary construction process, before experimenting with an extraordinarily diverse range of surface finishes, colours and textures. Projecting the building into an imaginary future, it is then subjected to extremes of natural forces and reaches a point of near-destruction, before undergoing a triumphant apotheosis, and beginning its cosmic journey once again.

This projected artwork whisked the audience on a whirlwind journey that explored the conception and design of the Opera House, through a recreation of the spectacular construction process to completion. 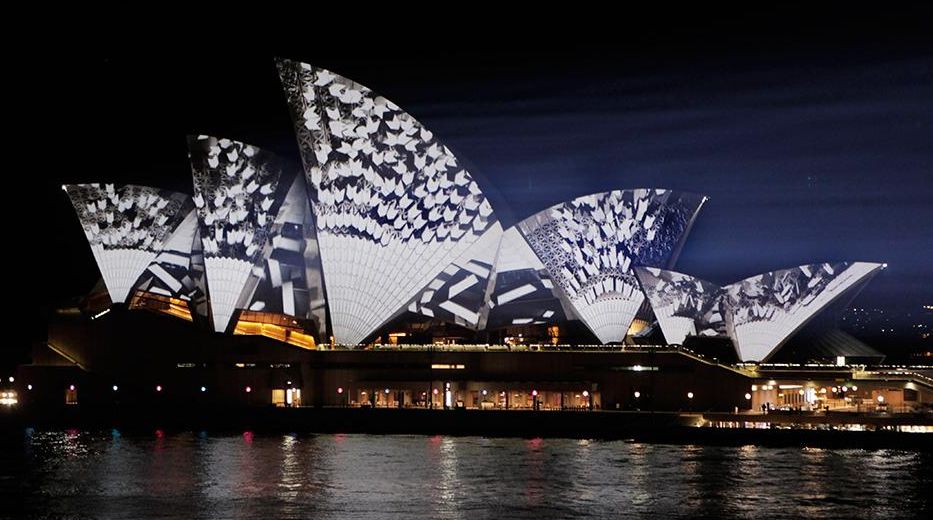 The magnificent building was seen expressing itself in a high-octane dance and light sequence, experimenting with texture, colour, costume and even its own haircut, before being doused in brightly coloured paints and inks, and showered in raw pigment.

In the third act, a cataclysmic storm and extremes of weather and climate put the building to its greatest test, before reaching its apotheosis, atomising into cosmic form before reforming and beginning its cycle once again.