Tantalizing brunch at the Andaz

Tantalizing brunch at the Andaz

Eastway is a New York style brasserie bang on Liverpool Street at the Andaz hotel by the main line station there.  Of course the hotel covers much of that block and includes six further restaurants and bars to choose from but the welcoming main entrance of the Eastway is such that you don’t feel like you’re in the Hotel itself, but rather a separated & rather stylish sidewalk brasserie.  Saying that, how much nicer is it to enjoy the very grand 5 star Hotel restrooms up the impressive sweeping staircase. 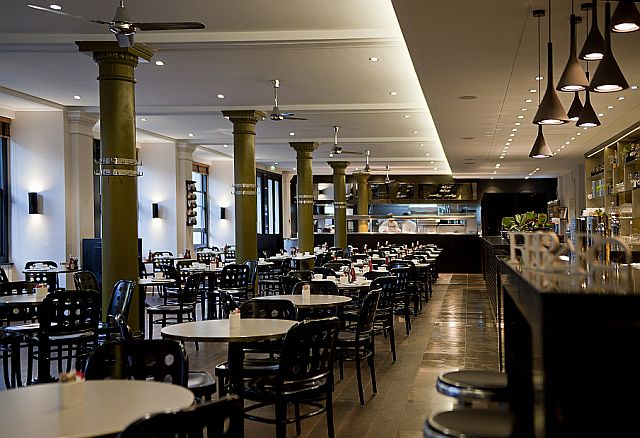 Formerly the Great Eastern Hotel, the Hotel continued under Hyatt management but underwent a stunning refurbishment in 2007 transforming into the new Andaz brand.  Quirky and informal laptop and tablet check-ins and outs and complimentary foyer bar area for the insomniacs are just a couple of the interesting twists of the Andaz hotel styling.

As an interesting aside, throughout the next 12 months, the hotel is incorporating hand-drawn art in one of the Hotel’s large king guest rooms.  The four British artists: Chris Price, Patrick Vale, ILoveDust and Patrick Morgan, have each been invited to depict their interpretation of east London’s past, present or future.  The first in the series, the Pearly Room by Chris Price will be a memorable experience for guests.

The Eastway replaced the old Terminal Bar at the Great Eastern.  This venue will no doubt have been a great find for those businessmen in the week who need a place for a meeting and a meal without busting the budget.  I should imagine that it has been a secret “find” since other restaurants and cafes in that area overflow with patrons (but no privacy) at lunchtimes.  The Eastway also enjoys the custom from the Hotel guests.  Now it is making a special welcome for City residents to discover its Weekend Brunch menu.

The interior is informal, café-comfortable, airy and on a lovely sunny day, the windows are wide open, giving the visitor a side-walk feeling without the proximity of vehicles or passers-by.  The kitchen has an open server area for those who like to keep an eye on preparation.  The main drinks bar was manned by a welcoming barman, Nick, and an additional 1/3 bar length is a self-service Boody Mary DIY station.

The bread station tempts with freshly baked croissants and pastries and the staff pointed out that these are complimentary with Brunch if you are craving carbs. 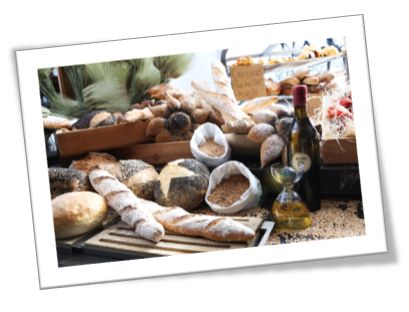 How fortunate that it was the Brunch that was the focus for our visit and it did not disappoint.  The NEW EAST LONDON WEEKEND BRUNCH (as it is being branded) presents a rich combination of traditional brunch dishes with some really quite unexpected options too.  Encouraging notes on the menu explain that the restaurant sources local and organic ingredients and that most options are also available gluten free.

With such interesting taste options on the Brunch menu, it was a challenge to pick dishes because many of the recipes were calling to us.  As the menu states so well, this menu presents a blend of hearty offerings to tantalise the healthy, the hipster & the hungover.  I knew it; that’s what it was; I was tantalized.  I don’t even like Marmite, but how could I refuse the signature dish? 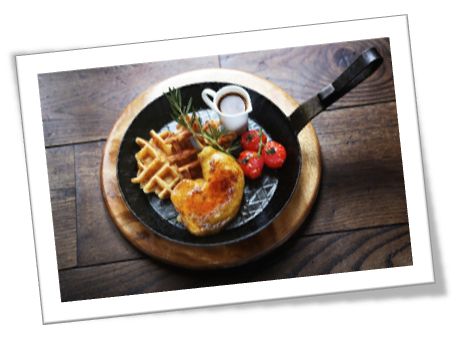 Our signature dish consisting of confit chicken legs glazed with Marmite & spices, served with a rosemary and bacon waffle.

This is one of the pricier dishes on the menu.  Delicious melt in your mouth chicken and roasted tomatoes on the vine with a charming little jug of special sauce and a giant savory waffle cut into manageable slices.  The presentation was excellent and only the little chicken bone remained.

I was also tempted to the DIY Bloody Mary station (£9).  The chili-infused vodka Bloody Mary spiced with Eastway’s own-recipe sauce was delicious and a real novelty deconstructed on the bar for your DIY pleasure.

Being a novice at cocktails, Nick, the barman, was there as if by magic to help me pick and choose from the wide variety of combinations. 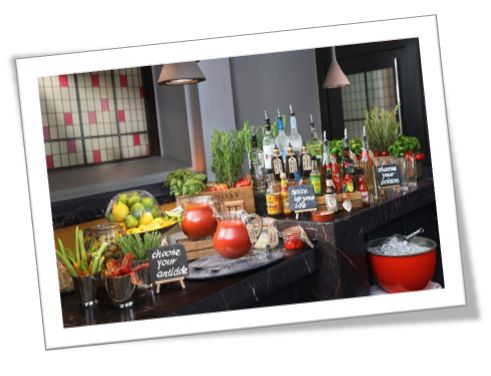 There is vegetable juice as a tomato juice alternative, and a rich variety of nibbles and salad bits to choose from as accompaniments.

The slice of bacon which he expertly added to my own concoction was a masterstroke.

My husband opted for the less adventurous BIG BREAKFAST.

He’s not an egg man, but even without the eggs he was conquered.  Be warned, this is a dish for the very hungry.

For drinks, he stuck with the excellent coffee, a bottomless bargain for addicts at £5.

As one would expect, the Eastway serves its breakfast menu daily and with a range of dishes and prices, it is not just only within the reach of city purses.  Along with The Big Breakfast, the menu includes homemade Granola (£6), Museli (£6), Fruit Salad (£6) for the health conscious and personalized Omelettes (£11) or Eggs Benedict / Royale / Florentine (£12) for the protein lovers.  Lastly, for those who cannot resist their sweetest carbs, the breakfast menu also includes Pancakes / Waffles / French Toast (£7). 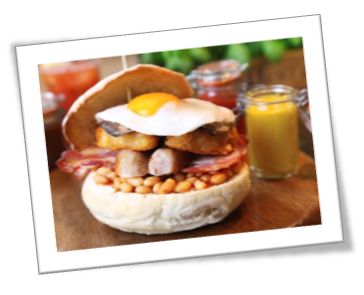 The Brunch menu is a headier selection and I can only explain the tantalization with a couple of other mentions off the menu:

CHEDDAR & BLACKBERRY BLINTEZ (£7) Thin pancakes filled & rolled with mild cheddar cheese and served with blackberry compote bursting with juiciness & a crispy apple salad.  We had to share a portion of this because it was so tempting.  Deliciously light but still very filling as a full portion and the twist of the crispy apple was a winner with us.

The BEEF CEVICHE (£9) is a very tasty spin on a carpaccio and, even though we shared the portion between us, was probably the reason hubby couldn’t conquer The Big Breakfast afterwards!

As you would expect from staff recruited and trained by Hyatt Hotels, the service was excellent and the staff were attentive but not, thankfully, overbearing.  Eddie, who took care of us in all things, introduced us to the menu and the bar as we arrived we were also very grateful for his insights into the Hotel’s history.

A plus for diners is that the menu is transparent; no hidden side orders to pay for which keeps the overall cost manageable.  Cost for a typical brunch will be comfortably within £15 unless you are really ravenous, which makes this, for me, a very reasonably priced Sunday eat out venue.  The DIY Bloody Mary station is a fantastic twist and a real treat if you also want to push the boat out with a cocktail.  For me, the cocktails will be a treat rather than a regular order, but I’ll get back to you on how that goes!

For the super cost-conscious, passers-by might head to a branded restaurant, thinking that the Eastway would be out of their budget, and yet the menu is quite reasonable.  It’s the little things which matter, and the bottomless Lattes and complimentary Baker’s Spread do a lot to curb the total.

The brunch is an unusual idea which isn’t typical for this area and the Eastway was not crowded at midday on a Sunday.  The traditional breakfasters had long-departed and the long lazy lunch crowd were just arriving as we left.  I felt so virtuous that I’d eaten earlier rather than later, and taken a long walk home via the City of London Fair at the Guildhall.