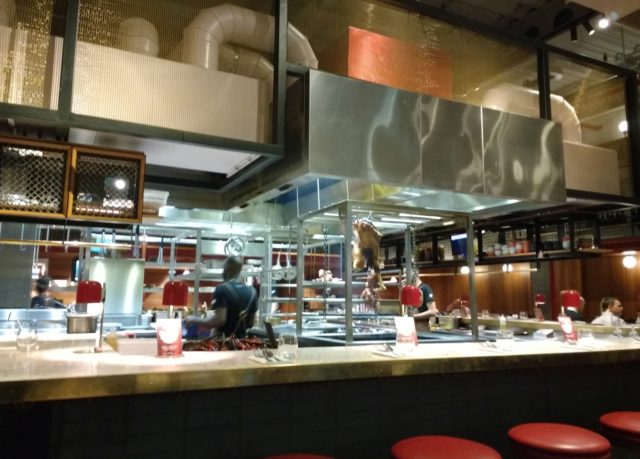 Unfortunately we missed the opening of this, the second Temper restaurant, following the huge success of the first in Soho.  The new one is in Angel Court within spitting distance (well almost) of the Bank of England in the heart of the City and opened mid-summer.  Temper is the brainchild of chef Neil Rankin, noted for his Smokehouse BBQ restaurants.  Neil is said to have pioneered London’s high end barbecue scene and is well known for his experimental use of bold flavours, drawing on global influences.

For those familiar with the original Temper restaurant, which has a Mexican theme, be prepared for something completely different (yes I used to watch Monty Python).  While the concept of a bar/restaurant surrounding a central firepit cooking area remains the same, the cuisine definitely is not.  Instead of a Mexican-spicy twist, Temper City serves dishes with an Indian-spicy twist but certainly is no standard Indian restaurant.  I think it is safe to say that most of the dishes served will not be found on any other restaurant’s menu – except perhaps the steaks, but these are all served with kimchi yoghurt or a red curry sauce to provide something of a variation..

The starters are all interesting and the ones the writer has seen are probably big enough to be mains elsewhere – certainly two starters would be enough to satisfy most appetites.  And with mutton and goat on the menu the options are a little different. 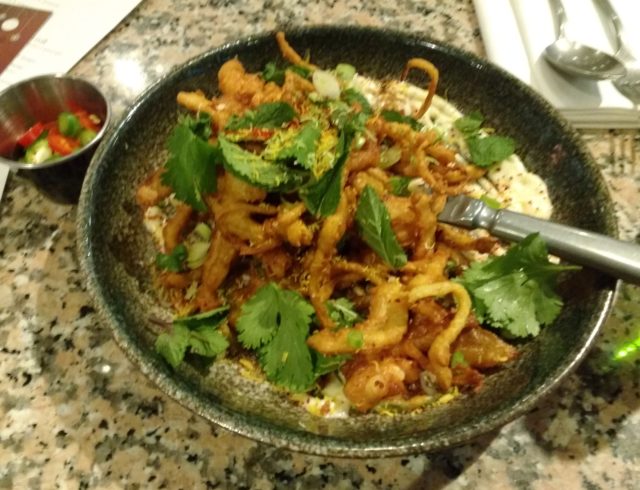 The restaurant is large and bright and, as noted above laid out around a central firepit dining area with counter around. There are also private dining areas upstairs.  There is a well-stocked bar, with a focus on gin (there are 25 different gins available).

Temper restaurants are unique BBQ and open fire pit restaurants with a focus on New World wine and with an innovative cocktail selection, created in house. We cook everything in front of your eyes using only wood and charcoal in our huge open kitchen fire pits in the middle of the room.

Our newest restaurant, Temper City opened in July 2017, serving BBQ meats and poultry alongside curry, tandoor roasted meats and home-made roti breads. We serve lunch and dinner right in the heart of the City of London and a brunch (bottomless available) on Saturdays. We have an outside area that we take bookings for for up to 40 people – please contact us for details.

The wine list features interesting but affordable wines alongside rarer fine wines from North and South America, as well as Old World classic regions like Burgundy, the Rhone, Piemonte and the Mosel. On the spirits front, we have our temper cocktail list plus a 25-strong gin list, each with their own G&T garnish and martini serve.