Paula Tomlinson updates us on the progress of the Barbican’s own wildlife garden – the setting for the bucolic scene on the front cover of this issue of Barbican Life.  The garden is unknown to many Barbican residents yet brings a taste of true countryside to our urban setting.

2012 was a very special year in our Fann Street Wildlife Garden – in many ways.

The garden was awarded a Certificate of Excellence by London in Bloom. It was also included as one of seven Secret Havens in a double page spread of the most recent Lord Mayor’s Show programme. 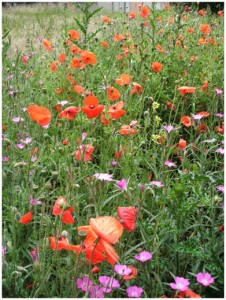 The Fann Street wildlife garden in full bloom in the summer

The focal point was the fourth year of opening in June of our Wildlife Garden to the public as part of London’s Open Gardens Squares Weekend (OGSW). And luckily the garden was at the height of its beauty.

We begin preparing months in advance. One of our volunteers grows an array of plants on her balcony for our yearly plant sale. Posters are put up and all areas of the garden are cared for. It feels like a mini Chelsea Flower Show : with us hoping that some of our flowers would delay their flowering and others hasten theirs!

On the weekend itself, we had volunteers at the gate to introduce visitors to the garden, and others throughout the garden answering any questions visitors might have on the pond, the insect hotel, the cottage garden, the wooded areas and hedges and the meadow. As well as someone manning the plant sales. Always a major attraction!

Over the four years, we have welcomed more than 1,000 visitors – some in rain but most in sunshine! Many express their delight at the peacefulness and diversity of the garden itself and at finding such a wild oasis in the middle of the City. The most surprising visitors were a group of 13 cyclists who came a couple of years ago. They all live in Tower Hamlets and meet every Sunday and cycle to a different destination – that year our Wildlife Garden was their choice.

One of the benefits of our opening is that we get the chance to spend 12 hours in the Garden over one weekend.

If you haven’t heard of Open Garden Squares Weekend, here’s a short description. Every year since 1998, it takes place early in June and last year included 212 gardens – many of which are private, like ours, and rarely open to the public. The Weekend is organised by London Parks and Gardens Trust and last year did so in association with the National Trust. Last year the ticket for the whole weekend cost £9 if purchased in advance and £12 if purchased at one of a selected number of gardens – including Fann Street. (Of course, you have free entry to this third Barbican garden.)

Each year we maintain all the various areas of the garden and in addition we focus on an area as a group. In 2010, we created a butterfly/bee friendly cottage garden, and in 2011, a wildlife pond on the south side of the garden. In 2012, our garden benefited from the Queen’s Jubilee celebrations. The original hedge along Fann Street received a Jubilee gift from the Woodland Trust of over 100 small shrubs and a special Jubilee Oak. 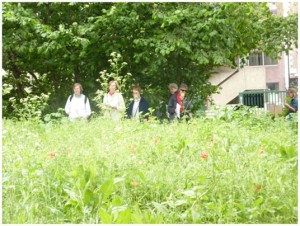 Before scything the meadow grasses and flowers were waist high.

Last year our group project was the wildflower meadow.

Efforts by the Barbican Wildlife Group to create a wildflower meadow have been hampered by the growth of strong grasses and invasive plants such as nettles, that thrive in the garden’s nitrogen rich soil. We do not want to eliminate these plants as they are beneficial to a wide range of birds and insects. But we do want to encourage the growth of a greater diversity of traditional field species.The only way to do this is to reduce soil fertility.

Following a lot of hard work removing over-dominant plants, we reseeded the meadow area completely – which resulted in a most beautiful summer display of a wide mixture of wild flowers and grasses.

The first scything of the meadow

The at the end of September, when all the meadow had finished flowering,, we collected the seeds of the plants we want to encourage and had the garden scythed for the first time in its history – and probably the first time in the City in decades!!

On the day, volunteers in the garden included City Garden gardeners as well as volunteers from the Barbican Wildlife Group. In charge of the day was Beth Tilson, a well known scyther and teacher of the essential scything skills, She began the day with demonstrating scythe assembly, types of blades – their sharpening and how they are used. Scything began in earnest at just before 11 and continued until 4.00 in the afternoon with an hour’s break for lunch. 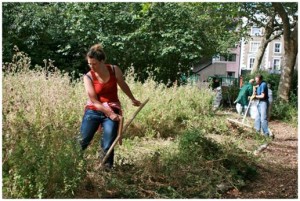 Scything and raking the hay.

The main tasks carried out by the volunteers were raking, bagging and loading the hay onto two City Gardens trucks parked on Fann Street. Both were fully laden by the end of the day, with two full bags remaining in the garden to be collected later. The work was hot and, until the volunteers reached the lower meadow, very dusty.

A fair amount of seed was also salvaged and scattered. During the following two weeks’ work sessions, the cut area was given a further thorough raking to remove as much loose material as possible.

Towards the end of the scything the volunteers found a family of approximately 8 frogs hiding in the damp vegetation at the bottom of the meadow. They ranged considerably in age and size, with one very large frog evading all attempts at capture. About five were caught and transferred to the area around the pond.

After a lot of research and various discussions with experts, including City Gardens, of how best to maintain and improve our wildflower meadow, the unanimous consensus was that scything is the best way to do this.

As mentioned earlier, our long term objective is to impoverish the soil as wild flowers thrive on impoverished soils. Scything one or two times a year encourages biodiversity and allows a range of wild flowers to become established in a meadow.

Garden mowers especially strimmers are not very suitable for cutting and raking as they chop up the grasses too finely to enable effective removal of clippings and therefore their nutrients, thus slowing the process of impoverishment. The longer you scythe a piece of ground, the better the area becomes : thistles and docks give way to grasses and wildflowers. So watch that space !

Seeds fall during the scything and small areas of bare soil open up to encourage germination. At the same time, there is less compacting/disturbance of soil. Soil undisturbed for long periods of time means wildlife have a chance to get established. 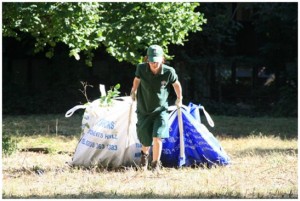 Hauling away the results of the scything

Discovering the range of plants that grow in the garden – observing them throughout the year. Watching the insects and birds feed off these plants and seeing how they use the shrubs, trees and plants for homes and shelter and to protect and raise their young.

This year we are continuing to work on all the habitats in the garden – pond, cottage garden, wildflower meadow, and the wooded areas. The area in front of Tudor Rose is being redesigned – to make it more butterfly and bee friendly. So please come and enjoy your wildlife garden!