In the middle of June 1912, a group of navvies, who were demolishing a row of tenement buildings on the southside of Cheapside, broke through the cellar floor of one of the buildings and saw something glinting in the earth. That June day they made a discovery that remains unmatched to this day. 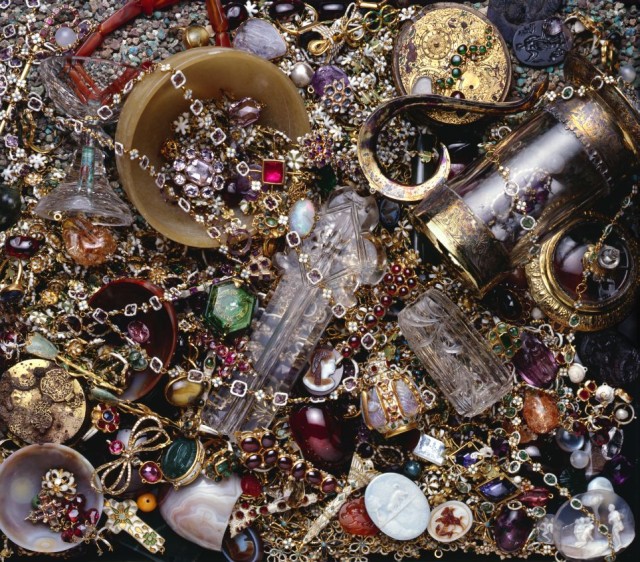 Items in the Cheapside Hoard – Picture copyright Museum of London

What emerged from the soil beneath the building on the corner of Friday Street and Cheapside was a huge glittering cache of tangled gold chains, jewellery, gems, hardstones, cameos, rock crystal vessels, watches, beads, buttons and enamelwork. The navvies must have known they had something of great monetary value in their hands but could not have known that they had unearthed the largest and most historically important treasure of its kind ever to be found.

A man who fortunately did see the importance of the find was the man to whom the navvies took their booty. George F Lawrence, nicknamed Stony Jack,   antique dealer, pawnbroker, collector of antiquities and sometime employee of the Guildhall and London Museums, was well known to all the navvies of London. They knew that if they dug something up in the course of their work, anything that looked remotely old, they could take it to Stony Jack’s shop in Wandsworth and he would buy it from them. He was even known to give a man the price of a half pint of beer if what he brought turned out to be rubbish: just to keep them coming. When the Cheapside navvies turned up with handkerchiefs and pockets bulging with jewels still embedded in clods of London clay, Lawrence set about cleaning the finds and encouraged the men to bring him everything they had. 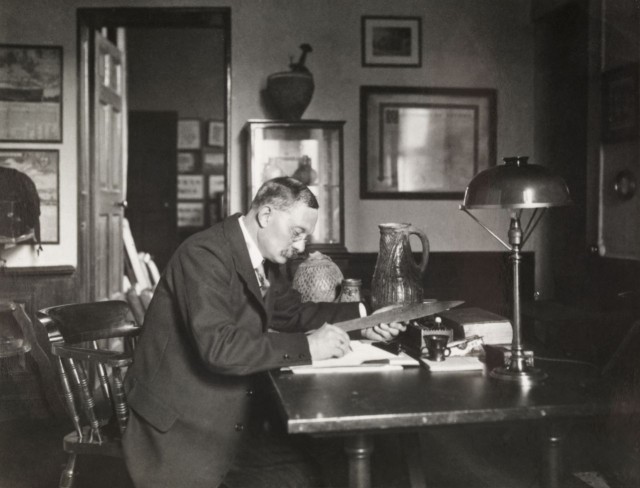 Lawrence identified what would come to be known as The Cheapside Hoard as the stock-in-trade of a 17th century London jeweller – a stunning cache hidden away and left untouched for centuries. He knew it was the find of his life and of great historical importance. Lawrence was immediately anxious to secure the treasure for the new London Museum, which had not yet opened to the public. After a number of hasty and secret meetings, he was eventually able to acquire The Cheapside Hoard for the new museum; although it was initially shared with the City’s Guildhall Museum and only reunited when the Guildhall and London Museums combined to become the Museum of London in 1976. A small number of pieces of the Hoard were given to the British Museum as a sop to quieten their complaints and some other pieces found their way into the Victoria and Albert Museum. It is to Stony Jack’s great credit that he ensured The Cheapside Hoard was kept for the nation and was not lost into private hands as it could so easily have been.

Since that time in Stony Jack’s Wandsworth shop, The Cheapside Hoard has never been together in one place. Until now. The Museum of London has assembled the entire Hoard and created a spectacular exhibition that not only displays every object from the Hoard but also tells its fascinating story.

The enduring mystery of The Cheapside Hoard is who owned this valuable cache? Why and when did the owner hide it? And, even more mysteriously, why did they fail to return and reclaim it? The exhibition explores these questions and whilst definitive answers remain elusive the curators are able to show that jewellery historians are beginning to tease out some of the elements of these mysteries. A short film playing on a loop in the exhibition tells a possible and persuasive story to explain the Hoard mystery. And most excitingly, recent detective work on a previously overlooked intaglio gem has unlocked a vital clue in dating the Hoard.

The exceptional importance of the Hoard to jewellery historians and researchers stems from the fact that very little 16th and 17th century jewellery has survived because it was melted down, broken or remodelled when it became dated and unfashionable. To have this large collection of jewellery untouched for centuries is quite unparalleled. It makes The Cheapside Hoard a treasure of not only national but international significance. 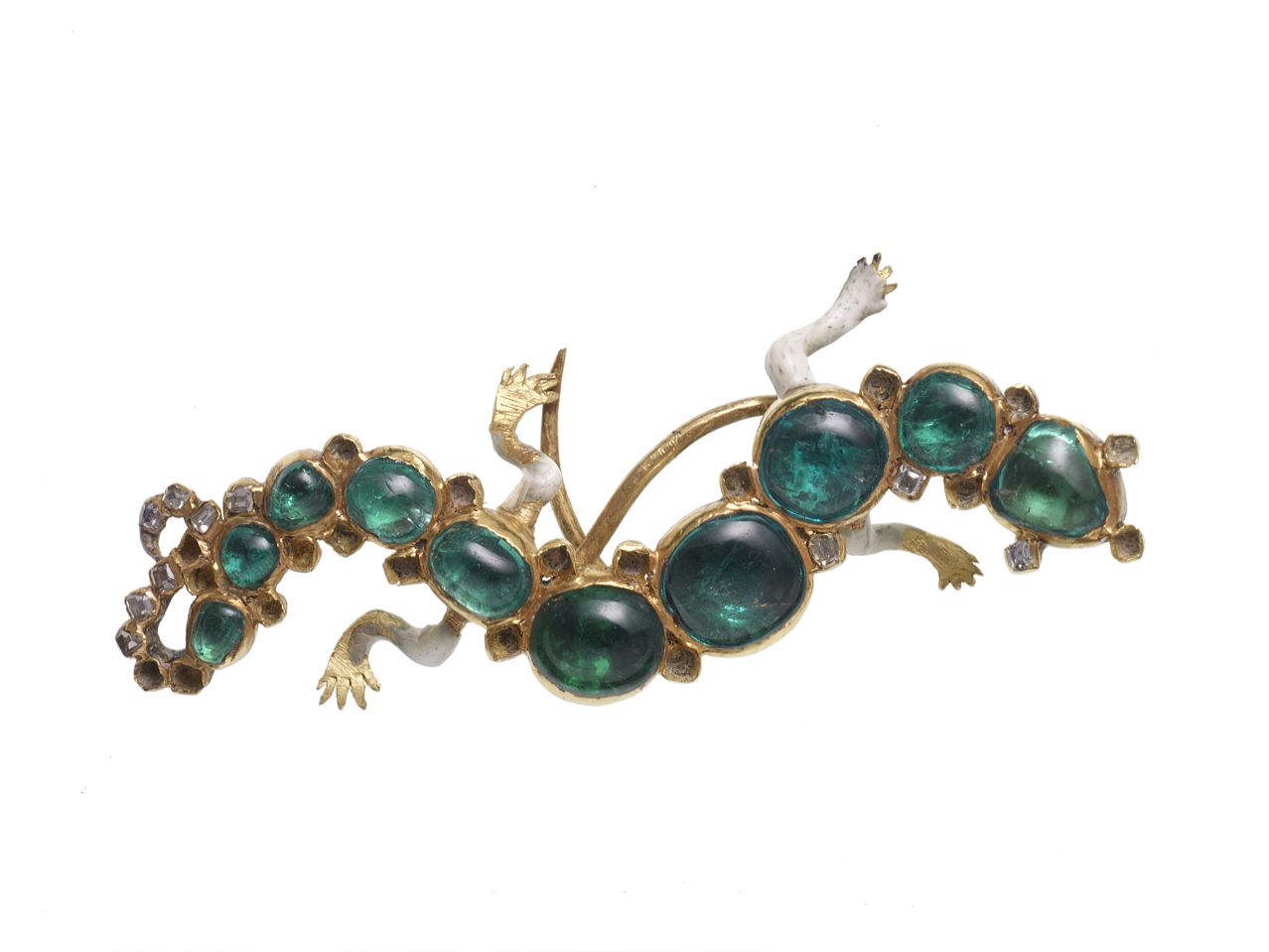 The Cheapside Hoard is a truly dazzling sight when seen all together here in this exhibition. Along with the dozens upon dozens of rings and earrings, there are enamelled gold chains, jewelled buttons, gems carved into the shapes of parrots and squirrels and ancient cameos. Highlights include an emerald and diamond Salamander brooch, a sardonyx cameo of Cleopatra from the third century BC and an agate cameo of Queen Elizabeth I. But the undoubted star of the show is an extraordinary gem-cased watch. This tiny enamelled watch is set in an enormous Colombian emerald with another emerald as its hinged lid. It is an object of unimaginable luxury and great beauty. 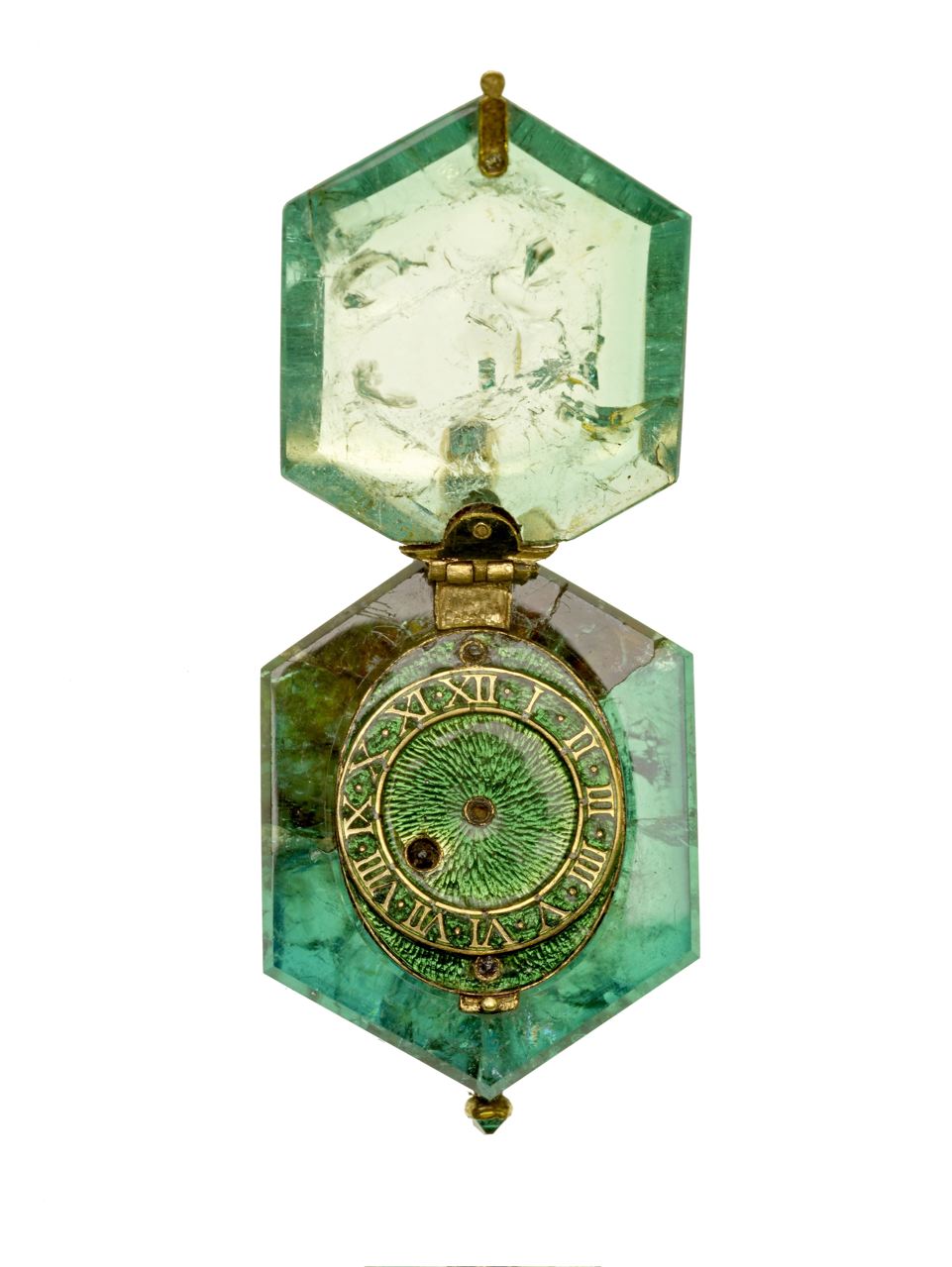 Kudos must go to the curators, led by Hazel Forsyth, not only for the stunning way in which they have displayed the Hoard itself but also for sourcing the many contemporary Elizabethan and Jacobean portraits and costumes that are arranged around the exhibition and demonstrate how this jewellery would have been worn. It brings the cold metal and hard gems to life in a way that is both evocative and haunting.