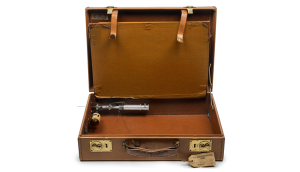 For the first time ever, never-before-seen-objects from the Metropolitan Police’s Crime Museum will be revealed in a major new exhibition. Since its establishment in 1875, the Crime Museum has only been open to police professionals – until now.

Using original evidence, we’ll unlock case files from some of the UK’s most notorious crimes from Dr Crippen to the Krays. Giving voice to the real people behind the stories the exhibition will explore the impact of crime, advances in detection and the challenges faced in policing London.