The Barbican Centre, with its Theatres, Galleries, Cinema and Library, is arguably the most significant cultural centre in Europe.  Perhaps what it currently lacks is a Concert Hall to match the best in the world and the development of such a concert hall is one of the driving forces behind what has now been Christened The Culture Mile.  This involves the linking of the various cultural developments in Farringdon and around the Barbican itself into a co-ordinated centre for cultural activities centred on the City of London. 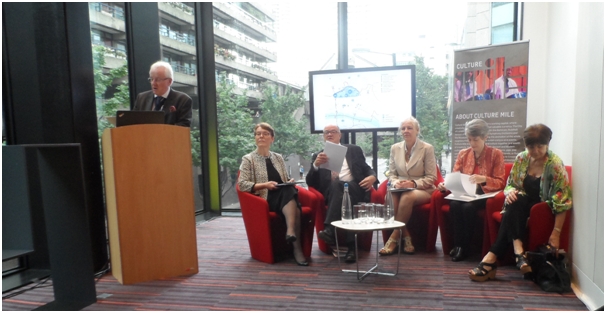 Culture Mile was launched in July with a presentation to the media in Milton Court, addressed by the Lord Mayor, Andrew Parmley – himself a fine musician – with accompanying statements from Catherine McGuinness, the city of London’s Policy Chief, Sir Nicholas Kenyon for the Barbican Centre, Sharon Ament from the Museum of London, Kathryn McDowell for the LSO and Lynne Williams, head of the Guildhall School – each setting out their aims with respect to the Culture Mile concept.

There are primarily two parallel driving forces behind this new, ambitious and admittedly costly proposed development.  First and foremost is the opportunity offered by the Museum of London vacating its current location on the southwestern edge of the Barbican Estate and moving to a currently derelict part of the old Smithfield meat market in Farringdon.  This £250 million move is already part-funded and due for completion by around 2022.

The current museum site would thus then be available for redevelopment into a new state-of-the-art Concert Hall, although this would be unlikely to be completed before the end of the next decade, and at a substantial capital cost.  The inspiration behind the new concert hall is sometimes attributed the The London Symphony Orchestra (LSO)’s new Musical Director, Sir Simon Rattle, who reportedly insisted that such a development be a condition if he were to accept an appointment as the new LSO music supremo – although the conditional aspect has since been denied.

The second big driver is the development of Crossrail (the new Elizabeth Line) which will run directly under the Barbican, with Farringdon Station consequently becoming one of the busiest in the country.  With one of the new station exits being constructed in Long Lane, between the new Museum of London site and the Barbican Centre, and the anticipated huge increase in footfall this will bring to the area, an easy, and attractive, pedestrian link between the three principal elements in the new scheme – the Barbican Centre, the new Concert Hall and the new Museum of London – is deemed both necessary and well worthwhile. 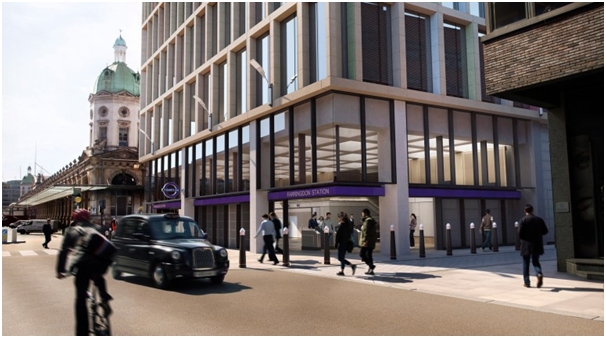 CGI of the new Long Lane Elizabeth Line entrance to Farringdon Station around halfway between the new Museum of London site and the Barbican.

The distance between the new Museum of London Site and the Barbican Centre and the new Concert Hall would indeed be around a mile – hence the new name for what had originally been referred to as the Cultural Hub, centred around the Barbican.

Apart from the costs involved in the construction of both the new Museum location and the state-of-the art Concert Hall there are a number of other aspects of the proposal.  One of the most significant to those of us in the Barbican is the reworking as an attractive pedestrian corridor of the currently unpleasantly noisy and polluted Beech Street road tunnel running between Long Lane and the Barbican Centre.  How this will be achieved is far from certain, although there are tentative ideas being put forward to incorporate street level art and perhaps retail outlets into the scheme.  Architects ideas are awaited.  Beech Street, though, does provide an important traffic link through the Barbican as well as an access point to some of the Barbican’s car parks, and while the pollution problems may fade away as internal combustion (IC) engine vehicles are replaced by non-polluting alternatives, IC engines are unlikely to be completely phased out until near the end of the century!

While the principal bodies driving Culture Mile forward are the City of London, the Barbican Centre, the Museum of London, the LSO and the Guildhall School of Music and Drama, others are involved in how the project will turn out.  Of particular interest in the context of the Barbican is the proposed involvement of the Royal Shakespeare Company (RSC).  The Barbican’s theatres were originally the RSC’s principal London venues until Adrian Noble took the Company away to concentrate on bringing the RSC to the provinces.  As Barbican theatregoers have noticed, recently there has been strong co-operation between the Barbican Centre and the RSC which has been bringing the latter back and resulted in some brilliant plays being performed on the Barbican stage – most recently productions of Richard II, Henry IV Parts 1 and 2 and Henry V, King Lear –  and most recently a stunning production of The Tempest utilising the latest in theatrical technology.  Coming soon is the RSC’s Romans season with Coriolanus, Titus Andronicus, Julius Caesar and Antony and Cleopatra.

Simon Russell Beale as Prospero in the recent RSC production of The Tempest.

It looks like this degree of co-operation, and more, between the RSC and the Barbican Centre will continue with the Culture Mile concept.  The RSC website refers to this with the prospect of the Barbican once more becoming the RSC’s London home utilising the theatre which, after all, was built for it.  Confirming this, RSC Artistic and Executive Directors, Gregory Doran and Catherine Mallyon, said:”We are delighted to be part of the new Culture Mile Network in the heart of the City, building on our long-standing residency at the Barbican. We love our London audiences and are looking forward to sharing our rich programme of theatre, events, exhibitions and education activity with even more people as a result of this thrilling fusion of arts, culture and technology.”

Probably the most significant drivers though are the City of London, which will provide much of the funding, and the Barbican Centre, In combination with the LSO, which will be responsible for the programming.  Commenting  on the City’s aims, Catherine McGuiness said  “We are redefining the City of London, so that the Square Mile becomes known and admired as much for being a world-class cultural destination, as for its position as a leading global financial centre. Culture has been at its heart for centuries, alongside commerce, and now more than ever, arts and culture are vital to the UK economy and our position in the world. As one of the country’s largest funders of cultural activities, we stand firmly behind Culture Mile.”

Sir Nicholas Kenyon commented “This is just the beginning of the story. With the exciting major development of the new Museum of London in West Smithfield, and the ambitious vision to create a new Centre for Music providing access for all on the present site of the Museum, we have the potential to work with stakeholders and partners to redefine the role of the City for future generations.”