The Elizabeth Line Reaches The Barbican – and its likely benefits

The Elizabeth Line Reaches The Barbican – and its likely benefits

Barbican resident Peter Savage updates us on the construction of the Elizabeth Line (Crossrail), which runs under the estate, and offers Barbican reidents direct access to the new rail link with stations at both the eastern (Liverpool Street/Moorgate) and western (Farringdon) ends.  Peter visted the Farringdon site to view the latest progress.

Crossrail is currently Europe’s largest infrastructure project running over 117 km from Reading and Heathrow in the west to Shenfield and Abbey Wood in the east at a cost of £14.8 billion and is on time and on budget. More than 10,000 people have worked on the project since it started in 2009 including 710 apprentices. One third of staff are women. Crossrail, in partnership with Women in Engineering, has recruited women into all areas of construction from entry level trades roles through to professional construction placements. 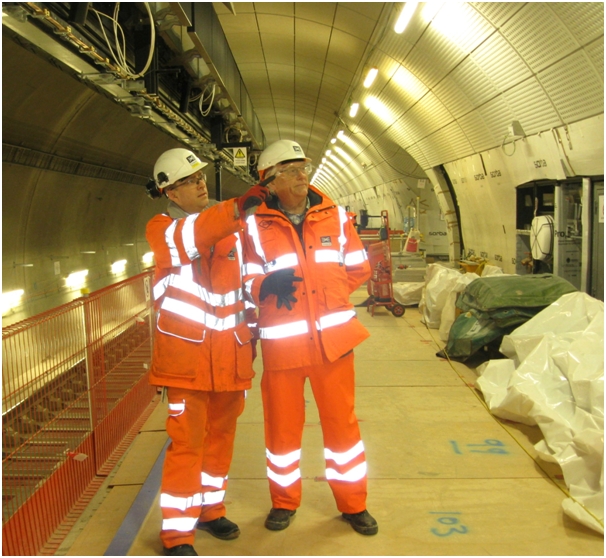 Tunnelling finished in June 2015 and the project is now focused on fitting out the stations and tunnels and testing the equipment and systems needed to operate the railway including the installation of track, signalling, escalators and architectural finishes in the station ticket halls and platforms.

The two platforms at Farringdon have been constructed 30 metres (nearly 100 feet) below ground. At either end of the platform tunnels the new station’s two ticket halls in Long Lane and Cowcross Street are taking shape with design features and art installations reflecting local history.

The ceiling of the Western ticket hall in Cowcross Street has a diamond pattern referring to the nearby jewellery quarter while the geometry of the ceiling reflects the geological fault line below the station and the River Fleet. Crossrail passengers will enter and leave the station via the new ticket hall opposite the Metropolitan line London Underground station which opened in 2011. The “urban realm” scheme includes creating a pedestrianised space in Cowcross Street and removing all street furniture other than a narrow central furniture and tree planting zone. 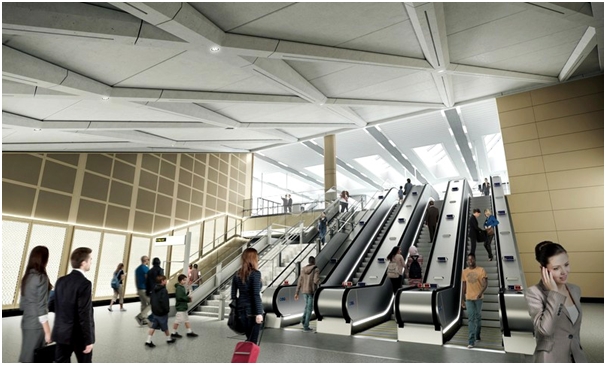 At the Long Lane station the concrete coffered ceiling reflects the Barbican’s brutalist architecture. Bronze-coloured stainless-steel wall panels will help to absorb noise while the decoration on the sliding screen gates, which separate the platform from the track, are derived from a barcode reading ‘Farringdon’. New housing, shops and offices will increase local facilities.

At the Moorgate end of the complex there will be a Moorgate ticket hall connected to the existing Moorgate underground and National Rail station with its main ingress in Moorfields and this will access the Liverpool Street Elizabeth Line platforms located under Finsbury Circus – so between the existing Liverpool Street and Moorgate stations.

Thus stretching from Moorgate in the west to Broadgate in the east, the Elizabeth line ticket halls are connected by two mined platforms.  Fully accessible ticket halls provide direct interchange with the Northern, Central, Metropolitan, Circle and Hammersmith & City lines, as well as National Rail services to Stansted and Southend airports. 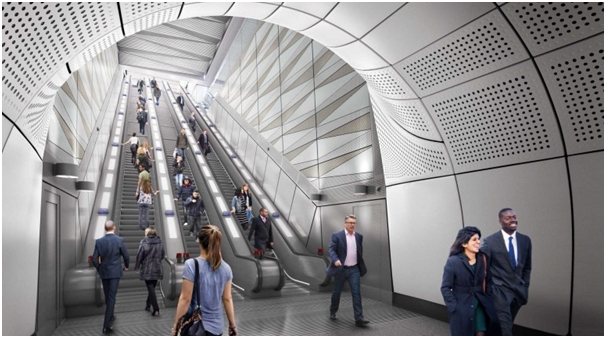 A number of physical constraints below ground at Liverpool Street made the station one of the trickiest to thread into the urban fabric, including a maze of sewers, existing Tube lines and the Post Office Railway.  In addition, layers of the city’s history had to be revealed before much of the work could get underway, which in total uncovered nearly 4,000 skeletons from the Bedlam burial site as well as thousands of artefacts dating back to Roman times.

Nestled in one of the City’s leading financial centres, surrounded by a continually evolving dense urban landscape, the design for Liverpool Street station makes the most of what little space is available to build a massive piece of infrastructure.

A unified architectural design inside the ticket halls is driven by the desire to maximise height in these constrained spaces. A shallow, folded ceiling plane formed by ribbed pre-cast concrete panels breaks the perception of the low flat ceilings to create a greater sense of space, scale and movement. The grooved, angled ceilings could be seen to resemble the pinstripes, often seen in the suits of City workers. A subtle sparkle of mica in the fibre-reinforced white concrete will glow with indirect lighting.

The entrance into the underground eastern ticket hall is through a striking, five metre high glazed canopy located in an open pedestrian plaza. Natural light will filter below ground during the day, while at night the canopy acts as a lantern with artificial lighting from inside shining out of the glazed entrance to illuminate the streetscape.

The western ticket hall (Moorgate entrance) is at street level and accessed through an angular portal entrance, framed by bold blue coloured glass. Glass panels and acoustic panels made from perforated enamel steel will be used on walls, while terrazzo will be used for the floors.

New forecourts and plazas around each entrance will create pedestrian friendly, accessible spaces with wider pavements. This will allow people to gather and dwell whilst maintaining clear pedestrian flows in and out of the station.

The ticket halls at either end of the new Liverpool Street station have also had special precast ceiling structures installed.  These are grooved, angled ceilings that have been designed to create a sense of space, and reflect the traditional pin striped suits of City workers.

The safety record of this project has been truly remarkable. One reason for this has been the emphasis on safety and a “learning legacy”. This has been achieved by an overriding policy objective that: “We all have the right to go home unharmed every day; we believe that all harm is preventable and we must all work together to achieve this”.

An additional article in the Spring issue also looked at the latest assessment of benefits the Elizabeth line will bnring to those along its route:

Following on from the previous article a new report suggests that the benefits of the new Elizabeth Line cross-London east-west railway will be even higher than initially reckoned.  In the Barbican we will have already noticed some of this in the building and/or planning of new commercial and residential buildings in close proximity to the Estate, which are utilising the prospective benefits of the Elizabeth Line in their justification and marketing to prospective occupants.  Indeed the go-ahead for some was not finally taken until it was certain Crossrail was actually going to go ahead.

With the line due to open in less than a year, property consultancy GVA has published new research that shows the impact of the Elizabeth line will be significantly greater than previously predicted in 2012.

The Crossrail Property Impact & Regeneration Study: 2012 – 2026 examines development progress along the route, shares lessons learned, and for the first time looks ahead as far as 2026 for the opportunities that will be realised once the Elizabeth line is fully operational and established as part of London’s transport network.

Key findings of the new report include: 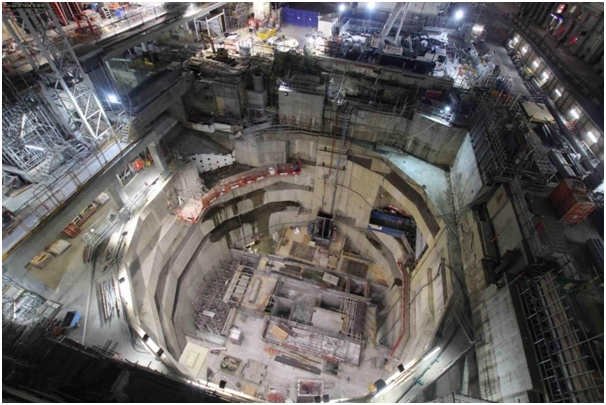 Herewith follow some comments on this latest report from key governmental and associated executives giving their views on some of the beneficial aspects of the Elizabeth Line roll-out:

Martyn Saunders, Regeneration & Spatial Planning Director, GVA, said: “Our findings reveal that the Elizabeth line will have a much greater impact on London and the South East than previously predicted, with further growth and opportunities to come. In addition to the creation of more than 180,000 homes and 362,000 jobs, Crossrail has set a new precedent for large scale infrastructure projects for future enterprises and developments to learn from.”

Andrew Wolstenholme, Chief Executive, Crossrail Limited, said: “Crossrail is delivering more than just a railway. As well as cutting journey times and giving passengers more options, it is driving regeneration across London and the South East. With less than a year to go until the Elizabeth line opens, this new report by GVA reveals the true extent of the impact, and lays out some of the key lessons for future infrastructure projects.”

Val Shawcross, Deputy Mayor for Transport, said: “Today’s report reiterates the huge benefits the Elizabeth line will provide to London and the South East – not just providing a new world-class transport link that will benefit millions of passengers a year, but as a powerful driver of jobs, homes and economic growth that is already having benefits across the whole of the UK.”

Jo Johnson, Transport Minister, said: “We already know the impact the Elizabeth line will have on rail capacity in London, with half a million passengers every day benefiting from state-of-the-art trains and brand new connections, including faster links to Heathrow, Gatwick and Luton airports.

The ceiling patterns here shown in this CGI of one of the near-Barbican  entrances are supposedly based on the brutalist steel and concrete structures of the complex.

“This report underlines the wider significance of Crossrail as a catalyst for jobs, homes and regeneration across the South East and sets an ambitious standard for future projects to aspire to. Crucially, with 96 per cent of the contracts for Crossrail won by companies across the UK, the economic opportunities of this transformative project are not just limited to London.”

Mike Brown MVO, London’s Transport Commissioner, said: “Not only will the Elizabeth line redefine how people travel across London, it will also change the areas around the railway with more homes and development being delivered. This report shows how transport infrastructure can regenerate neighbourhoods across our city, helping support the cases we’ve made for future projects such as Crossrail 2 and the Bakerloo line extension.”

With Elizabeth Line stations at both the east and west ends of the complex. Barbican residents will be in a prime position to be affected advantageously by the new rail link.  We already have some of the best transport links for any London residential complex with north-south and east-west underground rail links and bus services at each end of the complex, and the Elizabeth Line will further enhance these and undoubtedly give a boost to property values currently perhaps suffering a little from pre-Brexit worries and other government moves on buy-to-let and stamp duties affecting, in particular, higher value properties.

All in all the benefits accruing to property values in the Barbican Estate could be substantial with travel times to key office developments like Canary Wharf coming down to 6-10 minutes thus enhancing our City Centre location, with its good transport links and ever-growing nightlife appealing to young professionals.  Heathrow will be just under 40 minutes away by direct rail link rather than requiring rail link, or underground, changes, which will benefit the Barbican’s international travellers. A total of six Elizabeth line trains per hour will serve Heathrow Terminals from December 2019. Four will go to Terminals 2, 3 and 4 and two will go to Terminals 2, 3 and 5.When the service is fully operational in December 2019, Elizabeth line trains will provide a direct link between the airport and central London destinations including Farringdon and Liverpool Street.

Barbican apartments are often larger than similar priced properties elsewhere in London and with the gardens and lake enhancing the environment the appeal should increase further. Having the City Corporation as the ultimate landlord is also seen as beneficial. We doubt property values will advance immediately, but once the Elizabeth Line is fully operational in 2019 the benefits should start becoming apparent.