THE GRAND CHINESE NEW YEAR CONCERT
February 7th London, Barbican Hall at 7.30pm
Running time: 2 hours including interval
Tickets: 020 7638 8891 from £25 www.barbican.org.uk
and www.ticketmaster.co.uk
Piu Entertainment was founded in 2010 in Istanbul, Turkey, and has since developed a substantial reputation for presenting live music and art events at high profile venues around the world.  With a newly opened base in London, Piu have a strong programme of concerts planned in London and Manchester for 2017. 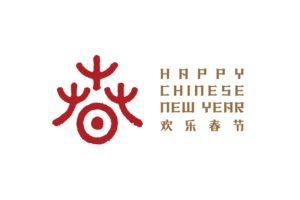 Piu kicks off 2017 with The Grand Chinese New Year Concert on February 7th at the Barbican Hall in London. Bringing in the Year of the Rooster is this vibrant concert of traditional Chinese music from 70 members of the combined Zhejiang Traditional Orchestra and Shaanxi Broadcasting Chinese Orchestra and conducted by Zhang Lie. This concert will give Barbican audiences a rare chance to experience the beautiful music of northern and southern China.

Dwelling in the Fuchun Mountain Capriccio/3rd movement: Listening to the Wind

The Silk Road
both composed by Jiang Ying, the late opera singer and music teacher 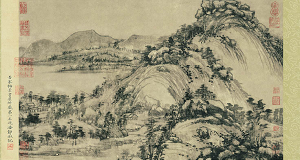 Dwelling in the Fuchun Mountains is one of the few surviving works of art by the painter Huang Gongwang (1269-1354) and is considered to be one of his greatest works.  The landscape painting was mysteriously burnt into two pieces in 1650; one piece is housed in the Zhejiang Provincial Museum in Hangzhou and the other in the National Palace Museum in Taipei.

Zhejiang Traditional Orchestra was founded in 1957 and is best known for its interpretation of the distinctive music of the province of Zhejiang in Eastern China, south of Shanghai.  The orchestra is dedicated to researching and developing traditional Chinese music and has commissioned works for traditional Chinese instruments such as the bamboo flute, the erhu (two-stringed violin), pipa (four-stringed lute) and sanxian (three-stringed fretless lute).  Zhejiang tour extensively: in 2006 and 2007 alone they performed 20 Chinese New Year Concerts in nine European countries.

Founded in 1950, Shaanxi Broadcasting Chinese Orchestra is one of the oldest professional orchestras in China.  Its stellar cast of musicians includes recent graduates from China’s top conservatoires who have significantly contributed to developing the orchestra’s repertoire and its international reputation.  Tours regularly take place across Europe, the US and Japan and the orchestra has won numerous first prizes in China’s all-important national competitions. 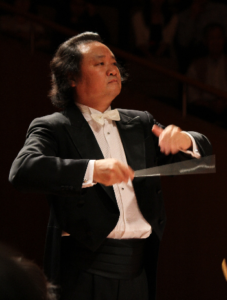 Biography – Zhang Lie
As a member of the Chinese Musicians Association, the multi-award winning Zhang Lie is a conductor of national renown and serves as Director of the China National Orchestra Society and as Vice Secretary-General of the China Conductor Committee.  Zhang Lie graduated from the Xi’an Conservatory of Music in 1984 and has worked in Europe, Asia and the US as well as China, Hong Kong, Macau and Taiwan.  He has written orchestral and ballet music, movie scores and commissioned works.  He has created over 100 concerto and vocal arrangements many of which are in the repertoires of other traditional orchestras across China.
“Lie Zhang has a deep understanding of Chinese tradition instruments and his own way to explain music.  He’s the soul of a concept; he can balance the sense of music and control the atmosphere of the audience.  He can lead the audience into a world of rich and varied feelings.”(British music critic) 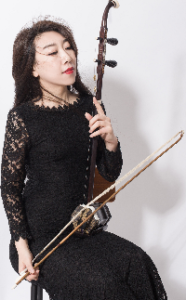 Lv Tingting has been playing the erhu since the age of 5; she studied at the Shenyang Conservatory of Music and Shanghai Conservatory and made her solo concert debut in 2011.  A multi-medal winner at China’s prestigious national competitions, Lv Tingting has performed with the Zhejiang Orchestra as a soloist many times in China, Hong Kong, Taiwan, Japan, Australia, the US and soon…the UK. 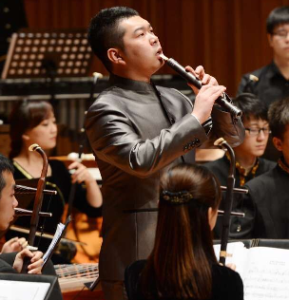