Barbican resident Liz Reeve tells us how she ended up joining the London Symphony Chorus and what is involved.

When Liz Reeve moved into the Barbican 20 years ago, she cannot have realised how many opportunities would present themselves so close to home.

Liz explains, ‘We decided to move into central London, as we were a bit fed-up with the time taken to commute.  My husband already loved the Barbican as his father used to live here back in the 1970s, and we ended up buying the flat next to where he used to live! I was even happier when my company decided to move my department to Golden Lane. I could look out of my boss’s office window and see our flat.’

At work, an opportunity then arose to sing in the newly-formed choral society. Like so many people, Liz had participated in many musical groups at school and at university, only for this to lapse when she started work. ‘ I was given a plastic recorder for Christmas when I was five and taught myself to read music. As well as the recorder, I ended up studying the violin, tenor saxophone and the classical guitar. I think that I must have been busy every single lunchtime and evening, which meant that I didn’t have any time for the choir; however those were the days where singing was taken seriously at school and we had an hour of singing every week’. Liz went on to play in the Walsall Youth Jazz Orchestra, which performed at an extremely high standard, and went on to make several recordings as well as giving concerts at the school proms and at the Fairfield Hall.

‘When I started work, opportunities to continue playing music became quite limited. However one Friday afternoon our weekly corporate newsletter appeared in my inbox and I saw that a workplace choir was being set-up. I jumped at the chance.’ This was twelve years ago, when such choirs were not so common-place. ‘I remember turning up for the first rehearsal with around thirty other nervous people, all of whom hadn’t sung for a very long time. However after a few months of rehearsals we gave our first concert in December 2005. That was particularly unforgettable as Dave Brubeck and his band were the main act, courtesy of the London Symphony Orchestra’. 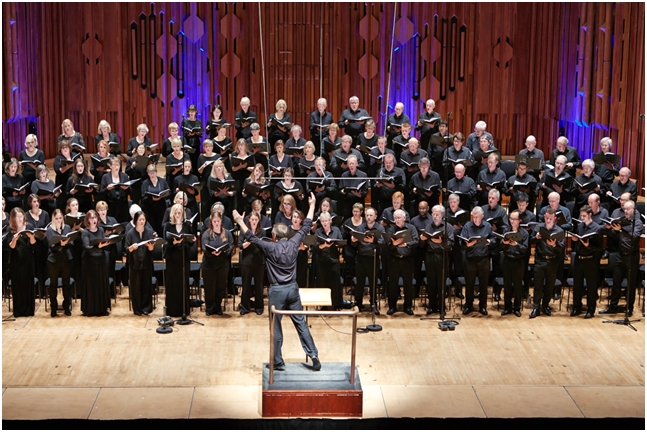 The London Symphony Chorus at the Barbican

Things proceeded uneventfully until another weekly newsletter arrived. ‘My company was one of the major sponsors of the London Symphony Orchestra, and employees were invited to join the London Symphony Chorus, which is headquartered in the Barbican,  to participate in the orchestral rehearsal of Fidelio conducted by Sir Colin Davis. He was one of my heroes, so how could I not apply for that?

We had to properly audition and five of us were selected. It was such a memorable day to wander down to the Barbican concert hall for the Saturday rehearsal, to walk through the artists’ entrance and then to take a seat behind the orchestra to watch Sir Colin, some fantastic singers, and of course, do a bit of sight-reading. I do remember that the members of the LSC made us all most welcome, and in fact two of us were immediately recruited!

However I realised that I needed to do a bit more work if I was going to be part of a symphony chorus and carried on with my singing lessons and exams, eventually gaining a distinction at grade 8. At that point I auditioned for the LSC and was lucky enough to be accepted.’ The concrete walls in the Barbican have helped with practising: ‘I haven’t had many complaints from my neighbours, although the person downstairs said that while my voice was quite good, he found the scales a bit boring and wished I’d sing something a bit more interesting!’

The LSC is independent from the LSO, but aims to be an outstanding choral partner for the LSO in its concerts, and to bring to the most diverse range of individuals and communities the appreciation and enjoyment of and participation in choral singing.

Barbican residents might be curious to know how many of the LSC’s rehearsals take place in and around the Barbican. Of course, most of the LSO’s choral concerts take place in the Barbican, but the majority of the chorus rehearsals take place at the City of London School for Girls, whilst orchestral tuttis are generally held in the Barbican hall or at LSO St. Luke’s. If you are lucky, you might see Sir Simon Rattle, Sir Anthony Pappano, Bernard Haitink or Gianandra Noseda walking through the centre or over one of the high walks on their way to conduct us for the first time, at the piano rehearsal. For some of the singers, this probably the most enjoyable part of the rehearsal process, as it’s the first time that the chorus gets to meet the conductor and we get to understand what is required from us.

London Symphony Chorus rehearsing at The Temple Church for a performance of Rachmaninov’s Vespers – Photo credit Robert Garbolinski.  Liz is in the centre of the photograph in the back row.

The London Symphony Chorus has recently celebrated its 50th birthday with an exciting programme, which included an eclectic mix of both popular and new choral compositions. The Chorus performed Haydn’s The Seasons under Simon Rattle, Elgar’s The Dream of Gerontius under Mark Elder and Schumann’s Faust Szenen under Daniel Harding, all with the LSO. Simon Rattle returned to the podium in June 2016 with the premiere performance of Peter Maxwell Davies’s new opera, The Hogboon. In September 2016, the choir performed Verdi’s Requiem in London with the LSO under Gianandrea Noseda with a repeat performance in the Lincoln Centre, New York at the end of October.

The chorus comprises around 150 members from all walks of life, who come together twice a week to experience singing wonderful music to an exceptional standard. We are a sociable and friendly group, with people coming from many varied backgrounds to sing together. The chorus is always happy to accept new participants.

Singing days allow members of the public to study, learn and perform popular choral works in an informal, enjoyable and high quality setting at LSO St. Luke’s. Five singing days were held in in 2015-16 that attracted a diverse group of singers of varying ability and experience from different backgrounds, with a total attendance of 1306 singers and many more who just wished to watch and listen. The focus of these singing days is on the vocal repertoire of the London Symphony Orchestra and London Symphony Chorus in the Barbican season, and for which some sight-singing ability is required.  The next singing day will be held on Sunday 9th April, at which we will be examining various Bruckner favourites. For more information on this event, please go to the link on the LSC’s website https://www.lsc.org.uk

If anyone is interested in learning more about the chorus and attending a rehearsal, please feel free to contact Liz directly at The_Reeves@Outlook.com. Finally, if residents are interested in joining the LSC, then they would be most welcome!  Details of how to apply can also be found on the LSC website.