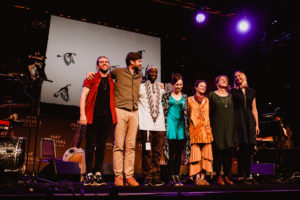 2019 saw The Lost Words: Spell Songs, a musical companion piece to The Lost Words: A Spell Book by Robert Macfarlane and Jackie Morris enjoy standing ovations at sell-out performances in major venues across the UK, including The Queen Elizabeth Hall at London’s Southbank. Spell Songs was a highlight of The Hay International Literary Festival in May, and in August they were invited to perform at the BBC’s Lost Words Prom in the Royal Albert Hall.

“… one of the most sublime evenings you will ever enjoy. The magic of these superstars onstage – the art, the music, the sheer, ravishing beauty of the language… one of the greatest concerts we’ve ever had at Hay. Long, rapturous standing ovation. People weeping for joy” Peter Florence, Festival Director, Hay International Literary Festival

Spell Songs will be performing at the iconic Barbican Hall as part of their Spring tour.

Tickets are available at www.thelostwords.org/live

At the Barbican they will be joined for an exclusive talk by the co-authors of The Lost Words Jackie Morris and Robert Macfarlane. These two award winning authors will enlighten us as to the origins of their creative collaboration and the enduring influence of The Lost Words book.

There is great musical potential within the pages of The Lost Words book; with its poetic rhythms, imagined birdsong and resonating watercolours.  Recognising this Folk by the Oak eagerly commissioned Spell Songs. They invited eight remarkable musicians whose music engages deeply with landscape and nature, to respond to the creatures, art and language of The Lost Words. Karine Polwart, Julie Fowlis, Seckou Keita, Kris Drever, Kerry Andrew, Rachel Newton, Beth Porter and Jim Molyneux sing nature back to life through the power of music, poetry, art and magic.

“Undoubtedly one of [The Lost Words] most thrilling transformations has been into the music [of Spell Songs] brought about by the vision and brilliance of eight musicians, who have together taken The Lost Words and turned it into something diverse, hopeful, moving and new” – Robert Macfarlane

The Spell Songs performances are woven through with original artwork by Jackie Morris (winner of the 2019 CILIP Kate Greenaway Medal and Shadower’s Choice Awards for The Lost Words) who lived and breathed the music with the musicians. With her visionary artistic skill, Jackie will also be painting live at each venue, conjuring creatures using inks and poetry.

And some interesting background from the publicist…

The Lost Words: A Spell Book began as a response to the removal of everyday nature words – among them “acorn”, “bluebell”, “kingfisher” and “wren” – from a widely used children’s dictionary, because those words were not being used enough by children to merit inclusion. The Lost Words then grew to become a much broader protest at the loss of the natural world around us, as well as a celebration of the creatures and plants with which we share our lives, in all their characterful glory.

Those already familiar with The Lost Words, will know it as a work full of wildness, beauty and power.  This bestselling and award-winning book has become ‘a cultural phenomenon’ (The Guardian), beginning ‘a revolution’ (Chris Packham) and moving people across the UK to work with charities, book-shops and local communities to raise money to get the book into schools, hospices and care homes, whilst simultaneously re-igniting a passion in children, teachers and parents to explore the natural world and to re-discover the lost words from the book, and their meaning.

Within three months of publication The Lost Words was voted one of Britain’s ten favourite nature books. It is a book that has inspired the nation and is the seed that has taken root and grown magnificently into Spell Songs.

Explorer Pack: Free to download from our website is a Spell Songs Explorer Pack created with KS2-KS3 in mind. Written by Eva John to celebrate the music, art and natural wonders found in Spell Songs.

More about the musicians:

Karine Polwart: a multi-award-winning songwriter and musician, a theatre maker, storyteller, essayist, and published writer, who’s script for her award-winning show ‘Wind Resistance’ was picked by Robert Macfarlane for The Guardian’s ‘Best Books of 2017’. Her success at the 2019 The BBC Radio 2 Folk Awards means Karine is now a seven-times winner of these prestigious awards, including three times for Best Original Track.

Julie Fowlis: often singing in the Gaelic Tradition, Julie is known for her crystalline and intoxicating voice. Winner of BBC Radio 2 Folk Singer of the Year 2018.

Seckou Keita: BBC Radio 2 Folk Awards 2019 Musician of the Year, an exceptional and charismatic musician and arguably the most influential and inspiring Kora player (22 stringed West African harp) of his generation.

Kris Drever: one of Scotland’s finest and most prolific songwriters, a member of award-winning folk trio Lau, and BBC Radio 2 Folk Awards Folk Singer of the Year 2017.

Rachel Newton: a singer and harpist with a reputation for “haunting and compelling” (The Guardian) performances and was awarded BBC Radio 2 Folk Musician of the Year in 2017

Beth Porter: a well-known cellist on the UK folk and acoustic scene and a one half of The Book Shop Band, who write songs inspired by books that are frequently performed at book shop gigs.

Jim Molyneux: a prodigious talent in many instruments, with an ear for a variety of genres from folk through to jazz and hip hop.