We had heard good things about The Merchants Tavern, the collaboration between well known chefs Angela Hartnett and her partner Neil Borthwick , with financial backing from the founders of Canteen, and we were certainly not disappointed.  The restaurant is on the site once occupied by The Cantaloupe, on Charlotte Road between the busy main roads Old Street and Great Eastern Street, and opened late last year.  Hartnett has had a distinguished cooking career primarily as a protégé of Gordon Ramsay and in her own right, while Borthwick, who is credited as head chef at the Merchants Tavern, too has a great culinary pedigree having worked in Michelin starred restaurants in the U.K. and in France before teaming up with Hartnett.

Now I have memories of Cantaloupe in its early days (probably back in the 80s or 90s).  Great and innovative food in very Spartan surroundings with elderly furniture which looked like it had been reclaimed from a scrapyard – and a little dark.  The contrast with this old memory and the newly designed  Merchants Tavern was very strong indeed.  The new restaurant is big, well furnished with dark green banquettes around the edges and polished wooden tables and comfortable chairs and oodles of daylight courtesy of a glass roof covering much of the restaurant area.  It is plush without being over-so.  We were immediately impressed.

We went there on a  Friday lunchtime and as my dining companion had a dental appointment back in the city at 2.30 we arrived early at around 12.15.  Indeed we were the first customers of the day, although the restaurant did fill up reasonably quickly thereafter.  It was probably around 80% full by the time we left (and its quite a big restaurant) a little after 2 pm, cursing the dental appointments as we’d have much rather stayed on sipping wine or cocktails – in other words the ambience was extremely pleasant, the seating comfortable, the service excellent.  All in all a very pleasant place to be on a Friday afternoon – or probably at any other time too!

Interior view of part of the restaurant area

And how about the food?  After all that’s the reason one goes to a nice restaurant. Well it lived up to the Hartnell/Borthwick reputation – and perhaps more.  The restaurant publicity suggests Spanish, French and Italian influences with British overtones.  This obviously results in a great combination of tastes.

Every dish we had was excellent.  We stayed with the a la carte menu, although the set lunch special – £18 for 2 courses, £22 for three – looked pretty good too but there were a couple of things on the ala carte which we both fancied.  Indeed my companion opted for two starters rather than a starter and a main with Jerusalem artichoke soup with a poached duck egg (£8) which was declared exquisite followed by Roast Quail, Hazelnut Pesto, Remoulade & Foie Gras (£9) which was also absolutely excellent with the whole combination working extremely well.  Indeed I concurred with this particular choice having ordered the quail starter myself too.  Whole quail makes for an excellent first course being of about the right size as an appetiser and when it was cooked and served in the way it was at the Merchants Tavern that more than proved the point.

I followed the quail  with Roast Loin of Venison, Lardo, Beetroot Puree, Crushed Parsley Root & Juniper Crumb (at £21) again served beautifully and cooked to perfection.  The venison was pink, succulent and tender.  We ordered a side of mashed potato, served in a small copper pan, which was perfection, as mashed potato goes, in itself. 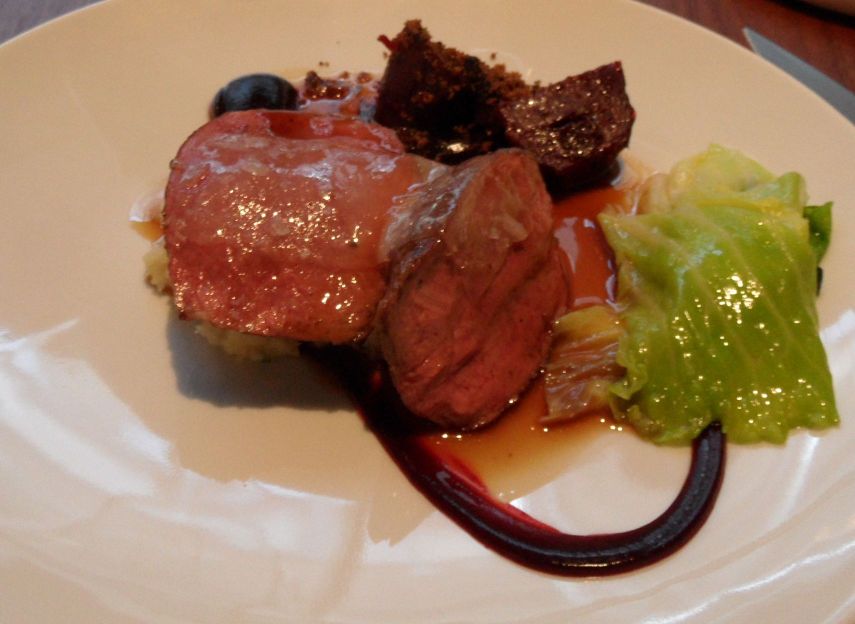 We ended with good coffee, served with beautifully cooked madeleines (almost melt in the mouth).

We washed the meal down with sparkling water and a couple of glasses of the very drinkable house wine.  I always assume that if the house wine is good then the other wines on the wine list will be pretty decent too, and am aware that eating out these days is a pretty expensive business if you want high quality food, so if the house wine is decent then the overall cost of the occasion can be sharply reduced!  The house wines (both red and white) are from Provence and come in at £5 a glass, £15 a 50 cl carafe or £24 a bottle.  There are several other wines available by the glass and carafe and, of course a much larger wine list for wines by the bottle.  Not enormous but easily sufficient to match most tastes and pockets with prices up to three figures for the best reds.

The Merchants Tavern is a 15 minute walk from the eastern side of the Barbican – and well worth the trek.  Truly a standout restaurant in the Shoreditch/Hoxton area – indeed compares well with the top Clerkenwell, City and Islington eateries with which it has to compete.  It definitely deserves to be a success.

The bar occupies a large and most attractive area and the bar staff can prepare some very interesting house cocktails as well as standard ones as well as other beverages.  A selection of nibbles, finger food and small plates is also available so one could just as easily stay in the bar area and eat and drink and still end up having a reasonable meal – or even just a quick snack to soak up the atmosphere.  Well worth giving  it a try.