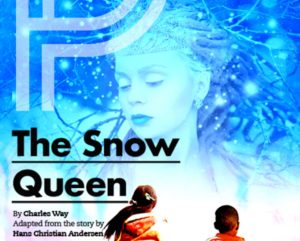 We’ve just had a heads up about The Snow Queen at Park Theatre this Christmas. It’s going to be a beautiful piece of magical story-telling. We’ve secured a discount code for Barbican residents of £18.50 tickets in bands B&C if booked by 1st November (this excludes Friday and Saturday performances) and bear in mind there are already £18.50 tickets for the two preview performances on 4 and 5 December just FYI. When booking just put in the code BARBICAN.

Based on the original 1844 story by the renowned fairy tale writer Hans Christian Anderson, this story follows Gerda as she goes on an epic quest through the seasons to save her best friend Cei before she loses him to endless winter. With the help of bickering flowers, overworked teachers, confused princes and princesses, Bae the talking reindeer and, of course, snow fights, the pair just might be ready to grow up after all.

From the ice-cold heart of winter, through to a knitted world of yarn-bombed spring, the team behind Park Theatre’s 2018/19 family hit Peter Pan – Winter Snow Ltd and J Clare Productions (with two Olivier award-winning shows to their name) – are delighted to be joining forces with Park Theatre to bring families this delightful adaptation of a classic winter’s tale.

Frances Marshall plays The Snow Queen, who travels throughout the world with the snow. Her recent stage credits include: Seasons Greetings & Joking Apart (Stephen Joseph Theatre), The Secret Garden and The Emperor & The Nightingale (Theatre By The Lake). Her screen credits include Capturing Mary (BBC Two).

Ayesha Casely-Hayford plays Gerda, who endeavours to find and rescue her friend from the Snow Queen. Ayesha is an award-winning voice artist and Off West End Award-nominated actress. Her theatre credits include: The Importance Of Being Earnest (Tara Arts), Where Will We Live? (Southwark Playhouse), We Dance We Work We Sing (Vault Festival and various UK venues), Adult Child Dead Child (Lost Theatre, London), With You Always (Old Fire Station, Oxford) and the Black Plays series (National Theatre, London).

Sarah-Louise Young (Grandmother/Mrs D/Lily) is an actress, writer, director and internationally renowned cabaret performer. Winner of The UK Stage Award for acting, named one of Time Out magazine’s Top 10 Cabaret Acts and voted Best Musical Variety Act in the London Cabaret Awards, she has also guested with comedy and musical performers Fascinating Aïda and La Soirée, and is a member of the Olivier Award-winning improvised musical group, The Showstoppers. Most recently her own show Julie Madly Deeply sold out at New York’s 59E59 Theatre. Prior to that, she played Queen Rat in Dick Whittington by Cariad Lloyd at the Lyric Hammersmith. She has appeared in the West End, London, on BBC Radio 4 and toured internationally, including to the prestigious Adelaide Cabaret Festival and has played numerous parts in television, theatre and short films.

Adaptor Charles Way began training as an actor at Rose Bruford College of Speech and Drama, where he wrote plays for other students to perform. In 1977 he joined the Leeds Playhouse Theatre as an actor but began to offer his services as a writer. A year later he joined the Theatre Centre in London as a resident writer. He has worked for various theatres as a resident writer and, as his career progressed, became more well known for being a children’s playwright. Charles Way has received numerous awards and nominations for his works, as well as being highly regarded and acclaimed, his works always receiving praising reviews.

Director Abigail Anderson started directing at Oxford University and later trained at Central School of Speech & Drama. She has directed over 85 productions, most recently Jack and the Beanstalk (Mercury Colchester) and a double bill of Macbeth and Much Ado About Nothing. She is Associate Director of Gonzo Moose, touring devised comedy shows. Their most recent show Once Upon a Time… very loosely based on some ill-researched facts about the Brothers Grimm, will be touring the UK for a second time in Autumn 2019/Spring 2020. She also served as Associate Director at Theatre Royal, Bury St Edmunds from 2008-2011. However, she states that most of what she has learned and uses in her every day as a director, she learned from watching other directors and working with actors.