Hello! Can you believe that we are approaching the festive season already? It’s good to know that the Barbican Centre’s entertainment schedule has something for everyone to enjoy in the weeks ahead.

The Royal Shakespeare Company’s season continues at the Barbican Theatre. “As You Like It”, “The Taming of the Shrew” and “Measure for Measure” are running in repertory, playing until January 18.

In “As You Like It”, Kimberley Sykes blends physical comedy, music and storytelling in an imaginative take on Shakespeare’s romantic comedy. Rosalind is banished to a world of exile, but not before catching the eye of love-struck Orlando, who is also forced into the Forest.

In “The Taming of the Shrew”, Justin Audibert turns the ultimate battle of the sexes on its head in as the 1590s are reimagined with women in charge. In this radical production, Baptista Minola is seeking to marry off her two sons, the sweet-tempered Bianco and the rebellious Katherine. Cue an explosive courtship and a keenly witty portrayal of hierarchy and power.

In “Measure for Measure”, when a young novice nun is compromised by a corrupt official who offers to save her brother from execution in return for sex, she has no idea where to turn for help. When she threatens to expose him, he tells her that no one would believe her. RSC Artistic Director Gregory Doran directs this new production which feels extraordinarily current.

Here’s a delightful Christmas treat for youngsters: “To the Moon and Back”, presented by M-SET, is an immersive experience for babies (from 3 months old), young children (up to four years old) and their grown-ups, to celebrate the 50th anniversary of the moon landing. Come on a multisensory journey of discovery, exploring tactile, interactive spaces filled with sounds, special effects and colourful props made from unusual materials. Conjuring the natural world, from rain made of feathers to stars made from velvet, ideas will be revealed so that everyday objects can be turned into tools for creativity and fun at home after the show. Combining stimulating live music, drama, visual arts and design, the show runs in The Pit from 13 to 21 December with morning and afternoon shows. All performances are relaxed.

The arrival of January 2020 brings the welcome return of the London International Mime Festival. From 14 to 18 January in The Pit, Australian artist Fleur Elise Noble presents “Rooman”. Like a graphic novel coming to life, “Rooman” is a rich tapestry of puppetry, projection, animation, dance, music and sound. 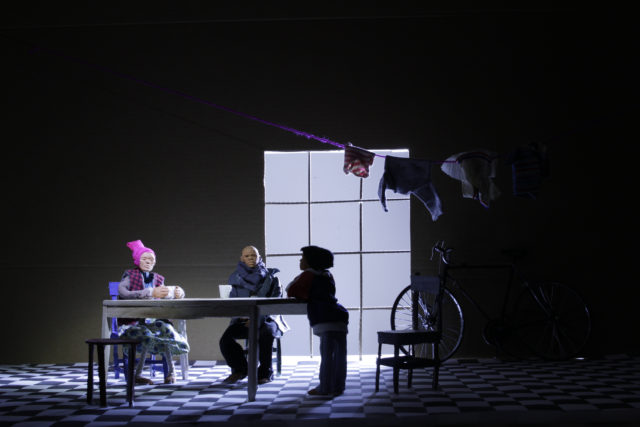 A young woman only finds escape from her monochrome existence when she meets a kangaroo man in her dreams. Obsessed by his colourful universe, she pursues a dangerous path to spend more time with him. Soon she must choose: to give up or to wake up. Matching wordless performance with a multidimensional paper set, “Rooman” tells a heart-warming story about falling in love with a fantasy.

From 21-25 January in The Pit, “Chimpanzee” is an extraordinary puppet play; a life-sized chimpanzee escapes the despair of her captive existence by piecing together memories of her childhood in a human home, reminiscing about her comfort, curiosity and freedom. 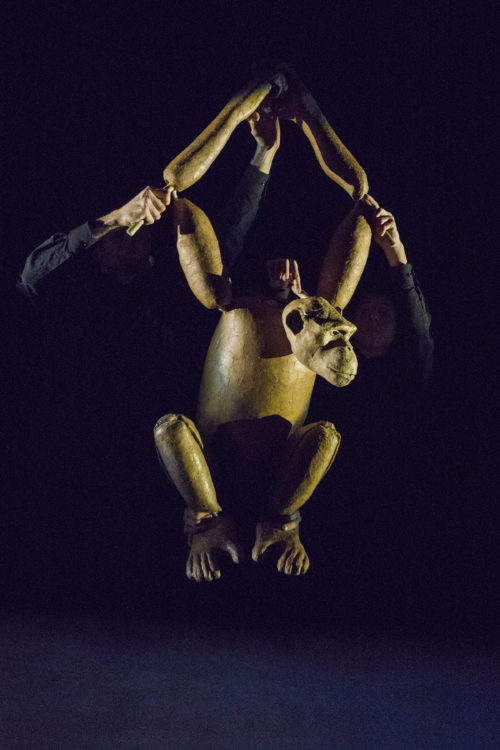 Three highly skilled puppeteers invest feeling, expression and delicately nuanced movement to the beautifully crafted creature of this poignant non-verbal production, conveying shifts in time and place through haunting sound and lighting. Written and created by Nick Lehane, it is distilled from real stories of apes once fostered into American families only to be abandoned to science as they reach maturity.

From 22 to 25 January in the Barbican Theatre, Peeping Tom present “Child (Kind)”. The Olivier Award-winning Belgian group follows earlier, acclaimed productions of Mother (Moeder) and Father (Vader) at the Barbican with this final part of its family-themed trilogy. 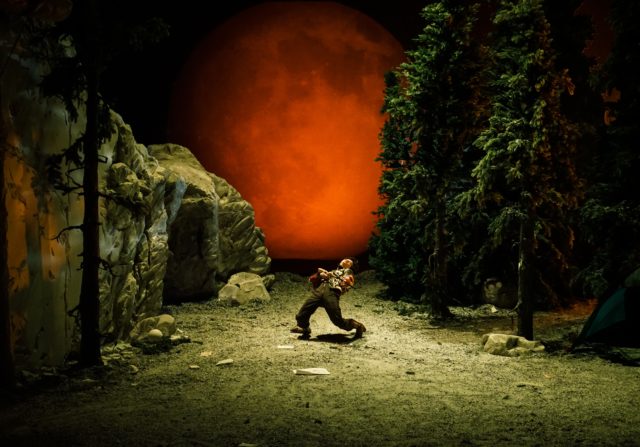 Between dance and physical theatre, “Child (Kind)” explores perceptions of childhood and the construction of identity. Towering trees and menacing cliffs reveal bizarre scenes that hold within them the fears and dreams of a girl caught up in traumatic situations. Uncannily conveying the body language of the young while swirling around the borders of reality, “Child (Kind)” features a mezzo-soprano as a child and seemingly elastic dancers who emerge from the scenery in endlessly surprising moves.

In the last of this year’s London International Mime Festival shows, Kiss & Cry Collective present “Cold Blood” from 29 January to 1 February in the Barbican Theatre. Dancing hands star in elaborate miniature sets, the action filmed live to become epic on a big screen. In this wonderfully whimsical production, the story of seven surprising deaths takes audiences into scenarios that touch on the fleeting fragility of life. Set to music including Ravel, David Bowie and Janis Joplin, “Cold Blood” combines intricate hand choreography, tiny props, live cinema and a witty script. Onstage visuals onstage appear as beautifully detailed kaleidoscopic vistas on film. The show draws on the film and dance backgrounds of husband-and-wife creative team Jaco Van Dormael and Michèle Anne De Mey – who co-directed Kiss & Cry at the Barbican in 2017.

From 19 to 22 February in The Pit, Diverse City present “Mid Life”. Three women paused at a moment in time – the menopause – talk about their fears, confront losses and invite acceptance as they unpack their real-life stories with soaring humour, honesty and rage. Claire was a disco-dancing champion, now she juggles family and work. Jacqui’s a carer to many but she needs to talk. Karen’s survived eating disorders and she’s got something to say. Join our characters as they find their way through the frustration, freedom and possibility of those middle years. Layering elements of song, movement and live BSL interpretation into the narrative, this transformational show connects experiences from different cultures and communities into a collective whole.

From 21 to 29 February in the Barbican Theatre, the Viviana Durante Company present “Isadora Now”. A remarkable evening of performance paying tribute to the American dancer and timeless feminist icon Isadora Duncan. To open, a rare opportunity to see Duncan’s own choreography. “Dance of the Furies” from 1905 exemplifies daring, courage and ambition – qualities that were widely disapproved of in female dancers at the time. Next, the evocative “Five Brahms Waltzes in the Manner of Isadora Duncan” by Frederick Ashton, performed by the legendary ballerina Viviana Durante in her first solo appearance for a decade. Finally, a new group piece by choreographer Joy Alpuerto Ritter set to specially composed live music by Lih Qun Wong. With an all-female ensemble, Durante’s show celebrates one of Duncan’s biggest legacies – a freedom of movement and spirit that has inspired artists and thinkers everywhere.

Cheek by Jowl/Piccolo Teatro di Milano present “The Revenger’s Tragedy (La tragedia del vendicatore)” from 4 to 7 March in the Barbican Theatre. Intrigue, corruption, lust and the thirst for power collide in Cheek by Jowl’s first Italian show. Seeking retribution for the murder of his fiancée by the Duke, Vindice is drawn into a terrible cycle of punishment that puts his very identity in crisis. 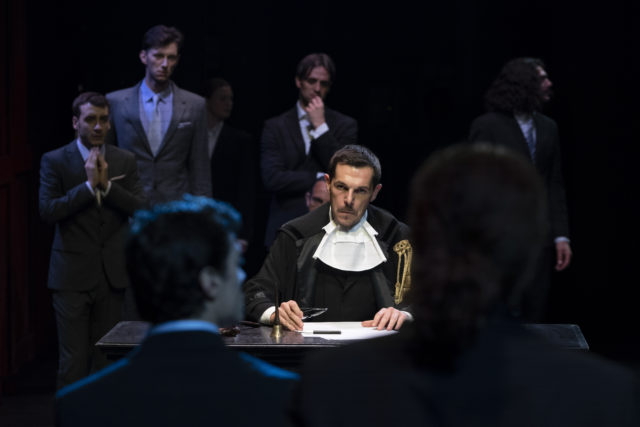 Written by Thomas Middleton (1580-1627) at a time of growing social unease, the play describes a government embroiled in shady affairs and a society obsessed with money, social status and fame. Created by director Declan Donnellan and designer Nick Ormerod, “The Revenger’s Tragedy” is performed by a charismatic ensemble of Italian actors in Italian with English surtitles.

Have a wonderful Festive Season!