Few UK pubs boast one Michelin Star, let alone two, but chef/owner Tom Kerridge and his wife Beth were the very first to achieve it in 2007 with the Hand and Flowers in Marlow. 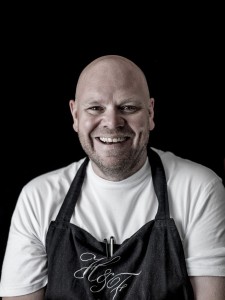 But as Tom explains, climbing the gastronomic heights wasn’t really their intention when they opened in 2005, just business survival. “The aim was simply to be a place that served great food in an environment that everyone felt comfortable in,” Tom says, “as for investing our own money in a 300 year old business? At the time it was absolutely terrifying, but we had to make it work.’ And they certainly did.

Anyone that’s seen Tom in his TV shows knows his food isn’t fancy, it’s what people want to eat, but how does he come up with recipe ideas?

Ingredients are crucial to Tom so it’s no wonder he was happy to again be a judge for Ocado, the online delivery service organising a competition to find Britain’s next top supplier.

“I’ve bought into this massively,” he says, ‘it’s a wonderful opportunity for small scale suppliers to get a national voice. Last year was the first year of doing it and it was very successful. Hannah from Hiver beers, who won it, had only been going six months and only a few people knew about her at the time.”

He likes the way that Ocado works, “being an online supermarket, they don’t have to hold huge amounts of stock in different warehouses so it means that small scale supplier can actually get out there with them and it doesn’t matter if you’re Hannah’s Hiver beer based in Bermondsey or someone based in Leeds or Manchester, you can be part of Ocado’s online produce. It’s an opportunity for small scale and passionate suppliers to get their message and produce across to everyone without having to scale up production to meet usual supermarket demands.”

Tom has been independent himself for a while now, but he doesn’t miss working for someone else. “For me being my own boss and making my own decisions about how I make a business work, whether with good decisions or bad, is the thing. The fact that I am making the end result is incredibly rewarding,” he says. “If it goes wrong it’s my fault and is it goes right it’s my fault, which is great.”

Tom’s latest opening is another pub, The Coach in Marlow, but this time it’s more pub-like with no reservations. “At lunchtime you can just call in and have a quick meal and come back at 4.00pm for a drink. Use it as you want to use it just like a normal pub. It’s our version of what a modern pub should be.”

“It is not just about Michelin stars in pubs,” he says firmly, “it’s the fact that there are now so many pubs out there doing great food that I like.” And that’s something we can all drink to.

Tom Kerridge is a judge for Ocado’s Britain’s Next Top Supplier; a competition to find the next big thing in food and drink. Visit blog.ocado.com before March 15th, for a chance to be stocked nationwide.