BA Chair, Jane Smith, recently had the opportunity to visit one of the tunnel boring machine sites under the Barbican and this article gives her impressions of what she found to be a fascinating experience.

There aren’t too many perks from being chair of the Barbican Association – but I think visiting a Crossrail tunnel boring machine probably counts as one. Certainly, when I was offered the chance to visit TBM Elizabeth digging the eastbound tunnel under the estate on her way to Farringdon, I jumped at it. 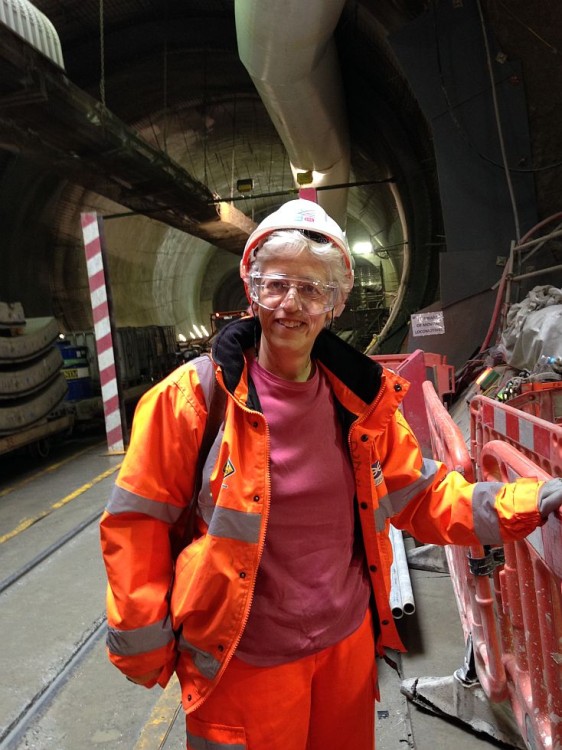 Jane Smith in full Crossrail visitor gearin one of the TBM tunnels under construction.

I met my host Gwyn Williams, the community relations manager for DJSV, the contractor for the eastern tunnels, at Crossrail’s site at Canning Town, where the earth dug out of the tunnels reaches the surface. From there it is carried on barges (twice every tide) down to Wallasea island, where Crossrail and the RSPB have built a bird sanctuary from the tunnel spoil

At Canning town I got a health and safety briefing and a set of boots, a hard hat, orange jacket and trousers, googles and gloves, and we set off for Stepney Green. There we met another set of visitors – a journalist from the New York Times and two photographers – and more Crossrail folk. One of them presented the whole project and what we were about to see, while the New York Times man asked lots of questions (he hadn’t had my advantage of listening to several of Crossrail’s presentations over the past few years). We all needed reminding to put our orange trousers on before our boots.

Stepney Green is where the tunnels diverge to head to Shenfield north of the Thames and to Abbey Wood south of it. But at the bottom of the shaft we turned left and headed west in a metal box on wheels called a “manrider”. This trundled along railway tracks laid in the tunnel all the way to the back of the tunnel boring machine. The manrider takes workers up the tunnel, while other trains and wagons carry material: concrete sections that line the tunnels, bolts, wires, oil for the TBM. The manrider lurched along at about 15 km, slowing and stopping abruptly now and then to let workers on and off or at passing places to allow trains coming the other way to pass. 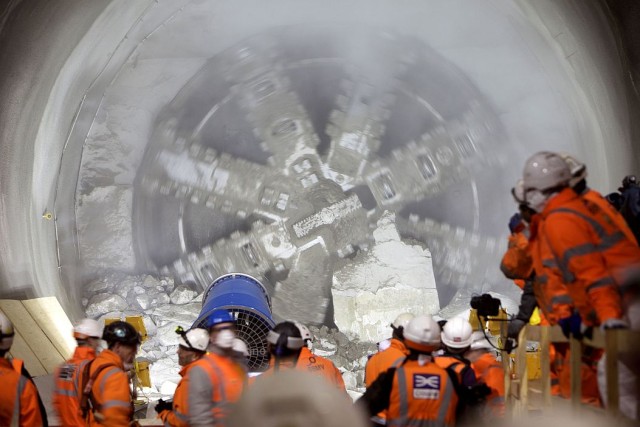 TBM Elizabeth breaking through into the Liverpool Street station excavation in January.

We passed through Whitechapel and Liverpool Street Stations. You could tell we reached a station because the concrete rings of the walls changed to sprayed concrete and the whole area was bigger – though that was hard to see through the metal grill and muddy windows of the manrider.  The tunnels are designed to use gravity to help speed up and slow down the trains, so they rise into stations and slope downwards coming out of the stations, and even in the manrider you could feel the inclines.

The journey was noisy – from a constant background beat from grout being pumped from the Stepney Green shaft along the tunnel, and from alarms, the noise of the train, whistles of track controllers, the shouts of workers. But it wasn’t too noisy to talk. One of my companions was the Crossrail project manager for Farringdon, who is passionate about getting more women into engineering and construction. She pointed out that Britain has the worst record in Europe for women in the construction workforce. She talks to schoolgirls to advocate careers in her industry: she tells those who want to be hairdressers that they could become welders: the jobs use similar skills and welders are better paid.

Arriving at Elizabeth was marked by a lurch to a halt, and us clambering out and up a ladder to a narrow walkway along the side of the tunnel. That brought us to the back of the tunnel boring machine – which in effect was a continuation of the walkway – except this time we were on one side of the TBM, with a similar walkway on the other side – the rails continued up the middle so trains could bring materials into the back of the machine and be lifted by a series of gantries into the right place for storing concrete rings, oil etc. Above was the conveyor carrying the excavated clay.

When we neared the front of the TBM, the machine had just halted to allow a set of the concrete rings that line the tunnel to be inserted. I could just glimpse the top rings being put into place, followed by an orange figure moving in swiftly to insert bolts into the rings to bolt them together. The machine would then inject a grout into the gap between the tunnel wall and the ring to seal the space. Hydraulic rams then pushed away from the last set of rings and the tip of the TBM started boring again as the machine barely perceptibly moved forward.

Just like a flight plan, the path the TBM needs to follow is preloaded into its computer, but the driver has the ability to make fine adjustments if the path deviates. When he stops for a ring to be put in place, he hands over control to the lead miner, who stands immediately behind the boring face and hand operates the equipment to insert the rings. The “key” segment at the top is the last one to go in, and once that is in place and the rings are all bolted together, he hands back control to the driver, and off Elizabeth goes again.

The concrete rings are made in Chatham and brought up the river to Canning Town, inspected, and sent by train up the tunnel to Stepney Green and beyond as they are needed. They are in numbered sets, with each ring specifically designed: the ones for bends need to be different from those on the straight. The TBM was inserting about 100 rings a day while under the Barbican.

The days when miners crouched in the segments of the shield digging out the earth ahead of them by hand have clearly gone, replaced by computer controls and precision measurements and instruments, but digging a tunnel is still a huge physical task and every now and then there was a reminder of the old ways. We watched men digging out one of the small cross tunnels by hand; others manhandled huge chains from a JCB that had just been lowered down the Stepney Green shaft. And before we all went down the shaft we were given a rescue kit containing breathing apparatus – and a numbered brass tally. As Gwyn said, no one has found a better way of accounting for who might be down a shaft or in a tunnel than a numbered bit of metal that doesn’t burn.

Crossrail is a 118-kilometre (73-mile) railway line. It should begin operation in 2018, once the new tunnels have been equipped and rolling stock delivered, with a new east-west route across Greater London.

Work began in 2009 on the central part of the line—the tunnel through central London—and connections to existing lines that will become part of Crossrail after several decades of proposals. It is one of Europe’s largest railway and infrastructure construction projects, indeed one of the largest construction projects of any kind currently under way in Europe.

For Barbican residents, Crossrail is a hugely significant project.  There will be Crossrail ticket hall access at both the eastern and western ends of the complex via Moorgate station (which will provide access to the new Liverpool Street Crossrail station which is being constructed under Finsbury Circus.  The Crossrail station platforms are located midway between Liverpool Street main line/London Underground stations and Moorgate station with its north-south Underground and British rail lines, and its east-west, Circle, Metropolitan and Hammersmith and City Underground routes.)  Barbican station on the west of the complex will provide direct walk-free access to the new Farringdon Crossrail station, which also connects with north-south (Thameslink) British Rail, and east west London Underground rail routes.  Once Crossrail is in service, the Barbican will be probably be the best-connected residential complex in the whole of London in terms of passenger transport links, which may bring yet another boost to sky-high property values on the Estate..

Crossrail’s overall aim is to provide a high-frequency commuter/suburban passenger service that will link parts of Berkshire and Buckinghamshire, via central London, to Essex and South East London. The new line will relieve the pressure on several London Underground lines such as the Central and District lines which are the current main east-west London Underground passenger routes, and the Heathrow branch of the Piccadilly line.  Indeed it will mean a journey from the Barbican direct to Heathrow will be able to be achieved in around 30 minutes.

The project’s main feature is 42 km (26 miles) of new tunnels. The main tunnels run from near Paddington Station to Stratford via central London and Liverpool Street Station. An almost entirely new line will branch from the main line at Whitechapel in east London to Canary Wharf, crossing the River Thames, with a new station in Woolwich and connecting with the North Kent Line at Abbey Wood in south east London.

The final tunnelling section was completed in early June, just after the Summer edition of Barbican Life went toi press, with the two tunnel boring machines, named Elizabeth and Victoria, having passed safely under the Barbican in the past few weeks – apparently completely unnoticed by residents.

Services will run on 136 km (85 mi) of line from Reading (63 km / 39 miles to the west of London) to Shenfield (to the north east) and Abbey Wood (to the south east). They will share parts of existing lines with existing services, mainly parts of the Great Western Main Line in Berkshire, Buckinghamshire and London (between Reading and Paddington) and the Great Eastern Main Line in London and Essex (Stratford to Shenfield). Nine-car trains are to run at frequencies of up to 24 trains per hour in each direction through the central tunnel section.

Crossrail will be operated by MTR Corporation (Crossrail) Ltd as a London Rail concession of Transport for London, in a similar manner to the London Overground.