At a recent  ceremony in Singapore, the world’s 50 top restaurants were ranked and included only two from the U.K. – both in Shoreditch so within easy range of Barbican fine diners.  The Clove Club, located in the Old Shoreditch Town Hall came in at 27th and Lyle’s on Shoreditch High Street at 33rd.  Top spot was awarded to Mirazur near Menton on the French Riviera.

This 50 best listing of world restaurants has been running since 2002 and is compiled by William Reed Business Media based out of Crawley in the south east of the UK and is based on reports from over 1,000 industry experts.  According to Sky News its awards rival those of France’s Michelin organisation.

In a longer listing from the same organisation, another local restaurant to the Barbican, St. John in St John Street near Smithfield Market came in at No. 112.  The other London restaurants in the long list of 120 were the Ledbury at No. 64. Core by Clare Smith at No. 66 (a controversial choice according to the Evening Standard) and Dinner by Heston Blumental in the Mandarin Oriental hotel in Knightsbridge at No.83. 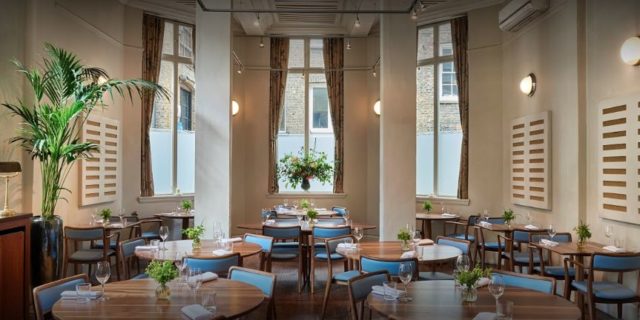 The Clove Club was originally a supper club hosted in a London flat by owners Daniel Willis, Johnny Smith and chef Isaac McHale.  However it took its permanent restaurant position in the Old Shoreditch Town Hall on Old Street in 2013 and quickly earned a reputation as one of London’s top restaurants earning a Michelin Star in the process. The restaurant interior fits in with its Shoreditch surrounds, with a laidback, casual décor and open kitchen. Willis, Smith and McHale wanted a relaxed atmosphere where customers don’t feel hassled by staff, so they often leave diners to top up their own wine and water and to enjoy each other’s company.  It was also one of the first UK restaurants to adopt a ticketing system, with reservations paid for in advance and extras added on the night.

Chef McHale has devised a five-course and a seven-course tasting menu featuring signature dishes of flamed Cornish mackerel and buttermilk fried chicken and plenty of delights from his homeland, such as haggis doughnuts. Another classic is the warm blood orange dessert with ewe’s milk yoghurt mousse and wild fennel granite.

Of additional interest to Barbican residents is that the restaurateurs responsible for the Clove Club also opened Luca in St. John Street  in 2016 serving what is described as a ‘Britalian’ menu.

Lyle’s in Shoreditch High Street occupies a space originally built as a factory for Lipton Tea.  The décor retains a mixture of utilitarianism – ash and elm tables or reclaimed British oak and walnut given a new lease of life as wine shelves  and a poured brutalist concrete floor, plus lots of natural light and seating is in classic Windsor chairs.

Chef James Lowe was enthused by his experience of dining at St, John and the Fat Duck by such differing great food experiences.  He worked for Heston Blumenthal , and at St. John and The River Café before opening pop-up eating experiences with chef friends Ben Greeno and Isaac McHale (he of The Clove Club – see above).  He opened Lyle’s four years ago with John Ogier to great success.

The short and sweet daily menu is micro-seasonal, showcasing what’s best on any given day in London and the UK; the wine list follows suit. Lunch is à la carte while dinner is a set menu.