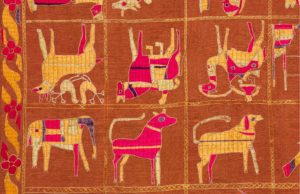 Unbound: Visionary Women Collecting Textiles tells the story of seven pioneering women who went against all established norms to create some of the richest, most diverse and global public collections in the UK today.

Textiles and costume give us a beautiful and intensely human insight into our history. Unbound: Visionary Women Collecting Textiles celebrates seven women who saw beyond the purely functional, to reveal the extraordinary artistic, social and cultural importance of textiles. From the exquisite anthropological collections of traditional Balkan costume by Edith Durham, to the ground-breaking contemporary South Asian collection of Nima Poovaya-Smith, these women defied the ‘traditional’ concept of collecting – an activity still more often associated with men – and forged the way for textiles as crucial documents of social history as well as works of art in their own right.

Unbound: Visionary Women Collecting Textiles includes sculptural 18th-century costume, intricately embroidered Balkan towels, headdresses and waistcoats, the 1920s and 1930s block printed fabrics of Barron and Larcher, as well as contemporary works: Alice Kettle’s huge machine embroidered panels Three Caryatids (1989 – 91), Yinka Shonibare’s 2007 copy of the last slave ship The Wanderer reimagined with ‘African’ batik fabric sails and Sarbjit Natt’s 1996 geometric patterned silk sari. These sit alongside archival photographs, sketchbooks and letters, many of which have never been shown in public. The exhibition looks at how these collections continue to influence us today and asks why textiles still have to fight for their place amongst the more established visual arts.

The 12-week, free exhibition is devised for and with Two Temple Place in London as part of its successful Winter Exhibition Programme.