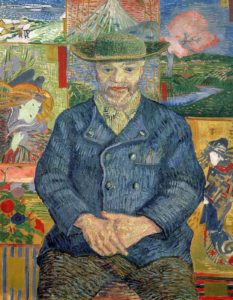 In cinemas nationwide from 4 June 2019

EXHIBITION ON SCREEN, the award-winning series that explores the biographies of history’s most revered artists, concludes its sixth season with Van Gogh & Japan, in cinemas nationwide from 4 June.  Van Gogh & Japan journeys from the critically acclaimed exhibition at the Van Gogh Museum, Amsterdam, to the beauty of Provence, and the enigma of Japan itself. Featuring Van Gogh’s personal letters and written accounts by friends and contemporaries this moving film reveals the story of Van Gogh’s deep connection to Japanese art, despite never travelling to Japan himself, and the role it has in understanding his most iconic works. As well as investigating the expression of Van Gogh’s ‘japonisme’, the film explores how Japanese society have developed an affinity to Van Gogh’s work as a result of his engagement with their culture. Featuring insights from contemporary artists, including calligrapher Tomoko Kawao and performance artist Tatsumi Orimoto, Van Gogh & Japan provides revealing and modern perspectives on the rich, symbiotic relationship between Van Gogh and Japan.

As the Edo period came to an end in 1868 and Japan opened up to the West, Paris became awash with all things Japanese in the form of decorative objects and colourful woodcut prints called ‘ukiyo-e’. Whilst Van Gogh had no desire to visit Japan, he became fascinated with elements of their visual culture and how they could be adapted in his own pursuit of a new way of seeing. He read descriptions of Japan and studied Japanese works carefully, learning from their bold and contrasting use of colour, their compositional fluidity of line and their unusual croppings of natural forms. He also acquired a large quantity of Japanese prints which he tried to sell without success, although they did provide a great source of inspiration.

In 1888, Paris became too much for Vincent and he left for the south of France, in the pursuit of new subject matter and a healthier life. In Provence, he discovered a beautiful landscape, powerful light and exotic people which spoke to his idealised vision of Japan – his Japanese dream. The productive yet troubled years that followed produced some of the most unique and iconic works in Van Gogh’s oeuvre such as The Sunflowers and his series of iconic portraits.

David Bickerstaff, Director of Van Gogh & Japan , comments: “The brilliant thing about working on a film about Van Gogh is the richness of insight one can gain from his letters and just looking closely at his artworks. You think you know them – they are famous after all – but with every viewing they reveal something new. The intensity of his fragile mind as he struggles with his art is laid bare with every mark he makes. It is the pursuit of a powerful simplicity that attracted Vincent van Gogh to the art of Japan, and the Japanese to his story.”

Distribution : Van Gogh & Japan is on limited release in 250 cinemas across the UK, including all major cinema chains (Odeon, Vue, Curzon, Picturehouse, Empire and Everyman) and independent cinemas, from 4 June 2019. Screenings can be found at www.exhibitiononscreen.com .