What does my router do?

Many people wonder what a router actually does. They ask why their router is the size it is, why they need it (“Why can’t I just plug a cable into the wall like I do with my TV?”) and why it generates the heat it does.. 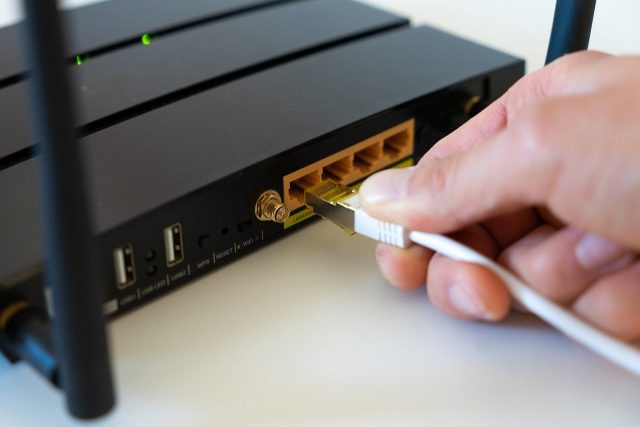 Image by USA-Reiseblogger from Pixabay

When you set up your router, you’re actually creating a unique network within your home. This network has its own list of IP (Internet Protocol) addresses for all the devices on your network, usually in the range of 192.168.x.x and occasionally in the range of 10.x.x.x. Because your router allocates these IP addresses to the devices connected to your network, these addresses mustn’t conflict with any on the internet. Luckily, the people that thought up IP protocol thought of this and declared that any IP addresses starting with 192.168.x.x or 10.x.x.x are set aside for use inside private networks – you cannot inadvertently connect to anybody else’s 192.168.x.x device through the internet.
So your home network is exactly that – an independent network. When you connect devices to this network, they can talk to each other if they are connected by a Switch: A Switch enables devices within the same network to talk to each other. In other words if you didn’t need to connect to the internet, you would only need a Switch for your devices to talk to each other.
Switching is a relatively simple process – each packet of data simply has to be sent to the appropriate port on the Switch where the destination address is located. Simple. However the internet is a separate network. You don’t manage the IP addresses on the internet. You are assigned an IP address from a pool held by your internet service provider (ISP).
By contrast with a Switch, a Router connects different networks together. In the case of your home router, it enables all the devices on your internal home network to connect to devices on the internet.
Also contrasting with a Switch, Routing is a much harder job: Every packet of data has information in it containing where it comes from, where it’s going to and (for some packet types) which packet number in the sequence of packets it is. The router decides which device the packet of data is going to next (most commonly another router). This is based upon a list of routing information it exchanges with other routers. Most importantly, the router changes information in every packet of data both outgoing and incoming, concealing the internal device IP address. This is called Network Address Translation. Because every packet of data is edited on the fly in both directions (swapping the internal device’s IP address with that of the router), this is a very intensive operation.

All home routers assign IP addresses to devices on your internal network. This is a simple list of which IP addresses belong to which device.

Most routers also contain a Firewall – this function examines packets going in all directions and decides which to let through and which to prevent. Even if you’ve never administered your firewall, you’ll find that, by default, your home router is configured to let your internal network devices to initiate outbound communication to devices on the internet and to prevent all internet devices to initiate conversations with devices on your internal network. Each packet entering the firewall port is compared to a list of rules, one after another until it meets the criteria for that rule – the packet is either then rejected or allowed through. So, for example, you could ban all incoming packets from a particular country, or permit incoming packets from your workplace. Quite how configurable the firewall is depends upon your router.

Another feature available on routers is Quality of Service or Packet Prioritization – this feature allows you to prioritize some traffic over other traffic, so you could prioritize your gaming traffic over your Netflix traffic or web surfing traffic.

As you can see, the Routing functionality is much more complex than the Switching functionality, which explains why the router has to be a more powerful device than is necessary for a Switch. Hence the size and the heat generated.

When your router also provides WiFi, what it actually does is to provide a Wireless Access Point. Not only is this another function, but because it generates microwave signals, it also requires more energy to do so. This further increases the size required for the device and the heat generated.

As you can see, your router is a pretty complex bit of kit, that’s why it is the size it is and generates the heat it does.

Our own local IT guru, Ian Posner, gives us advice on home technology – from the March 2021 issue of Barbican Life magazine.

Ian Posner is a freelance IT consultant specialising in performance troubleshooting and optimisation: In his free time, he provides technical help to his neighbours!