When the Walbrook River powered a watermill

When the Walbrook River powered a watermill

Gillian Laidlaw has been following the Museum of London Archaeology (MOLA) recently completed excavations at the Bloomberg Place site off Walbrook which was a major project which uncovered some fascinating insights into Roman Londinium.

Before any groundwork begins for new buildings archaeologists must be given access to the site to record any evidence of previous use. In the City of London this must be a never ending task as our skyline is permanently occupied by cranes. Often finds are few because pile driving and deep basements have destroyed any remaining evidence.

However over the last 150 years or so what was once the valley of the Walbrook River has proved to be an especially important area for finds from Roman Londinium. The settlement was founded on two hills between which ran the water channel of the Walbrook River, one of the major streams flowing through a deep valley into the Thames. Quick draining gravels lie over sticky London clay subsoil which means that the ground has remained waterlogged for centuries. Wet is the perfect environment in which to preserve organic matter like wood, leather and textiles. Nothing would survive twenty metres to east or west of the river because the soil drains too quickly.

A dig, undertaken by Museum of London Archaeology (MOLA) has recently been completed at the site of the new Bloomberg Place bounded by Cannon Street, Walbrook and Queen Victoria Street which will help to rewrite the history of London. Finds including the substantial remains of a bridge, timber buildings and 10,000 smaller objects have been made 12 metres below the current ground level, the deepest such deposits known in London. These excavations resulted in Londinium being called “the Pompeii of the north” in media reports. “The Herculaneum of the north” would be a more appropriate description. The waterlogged Walbrook preserved organic objects in a similar manner to the pyroclastic cloud, which engulfed Herculaneum, allowed charred organic objects to retain their original shape. 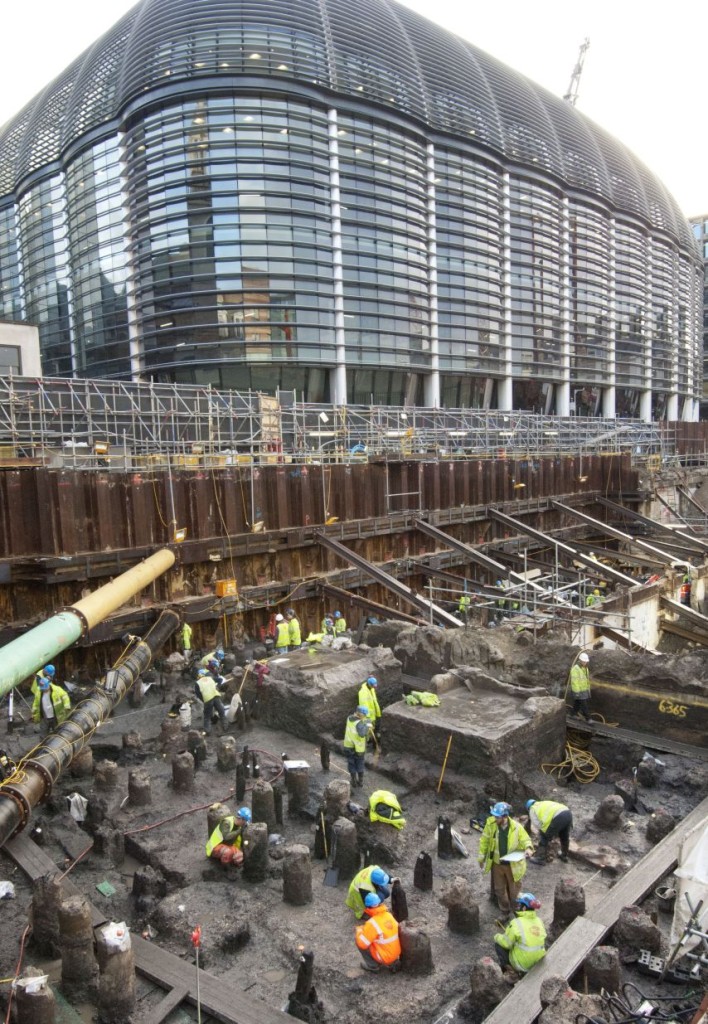 Bloomberg Place looking southeast showing the extent of the dig and the numbers of people taking part.  Photo © MOLA

Before these excavations the most famous find in the Walbrook valley was the Temple of Mithras in 1954. As work was drawing to a close a large stone building with an altar was discovered which was clearly a religious building. On the final day before the archaeologists were due to leave the site a head of the god Mithras was found. Mithraism was a secret first century AD male cult, an early competitor to Christianity. The plan had been to demolish the remains of the building but the ensuing public outcry, together with questions being asked in parliament, finally persuaded the developers to pay to remove the temple and re-erect it at ground level for all to see.

Unfortunately the reconstruction was considered to be historically inaccurate. As part of the work currently taking place in the Walbrook valley the temple was dismantled in 2011 and will be re-erected closer to its original location on what was the east bank of the Walbrook. In the meantime the story of the temple and many of the finds are on view at the Museum of London.

Although the Walbrook divided the settlement its deep valley was crossed by a substantial timber bridge offering an uninterrupted east/west passage. At high tide the Thames flowed up into the Walbrook so that goods could be loaded or unloaded in the heart of the settlement. Well preserved building structures have been found in the waterlogged layers both north and south of the bridge. Even 2nd century metal horse shoes have been found which are assumed to have become stuck in cart ruts and come off as horses were led over the bridge. In this period horse shoes were strapped rather than nailed to the horses’ feet. 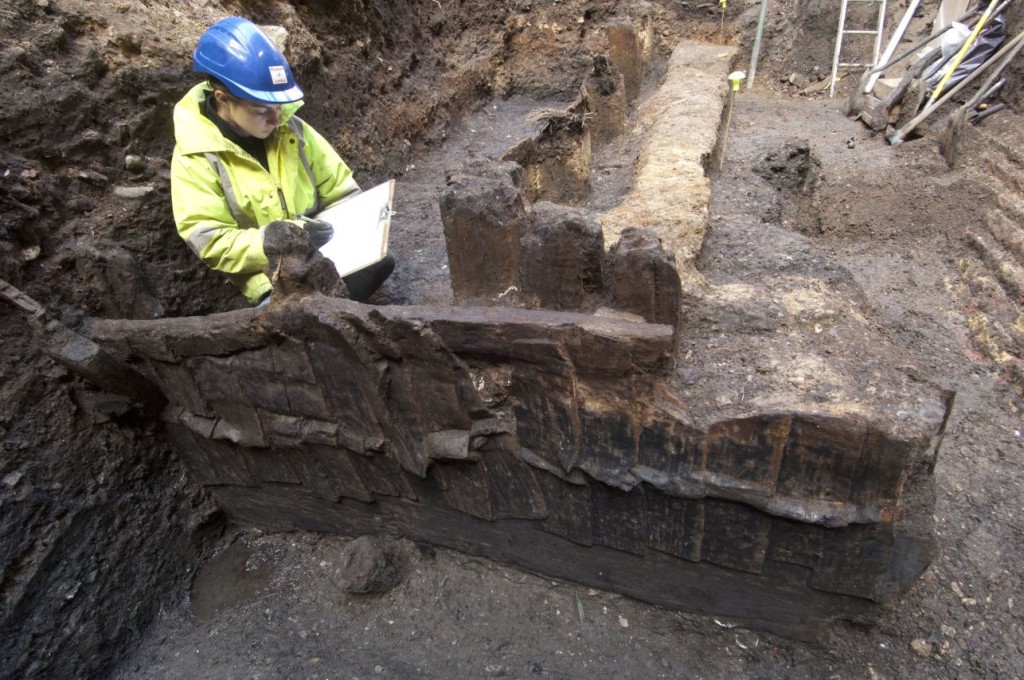 Because the river banks sloped wooden box revetments packed with soil were constructed to provide level waterfront platforms on which to build the first houses. Houses seem to have been assembled quickly to provide accommodation for new arrivals at the settlement. During an excavation in the Walbrook valley in 1994/6 evidence was found of a drain of AD47 only 4 years after the Roman invasion of Britain. By AD 55-60 there were already rectangular wooden shacks on the east bank.

Excavations have uncovered thick oak planks or baseplates with mortice holes cut into them to support upright wooden posts. Between these were erected vertical walls consisting of timber planks, wattle or earth. The walls were about 2m high and the buildings seemed to be of about 1½ storeys, perhaps having loft accommodation under a shingle roof. The buildings fronted onto alleyways. Adjacent timber buildings were sometimes of different constructions suggesting that individuals employed their own builders, not one builder for a street. One rare find has been a Roman oak panelled door with moulded frame. 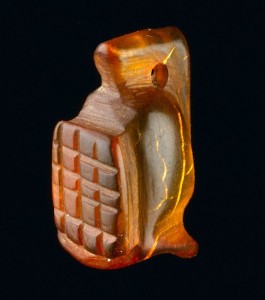 In AD60 Londinium was sacked by Boudicca but the buildings on the east bank of the river seem to have survived, perhaps because they were too waterlogged to burn. The Walbrook valley excavations of 1994/6, further to the west, uncovered houses and shops showing evidence of fire damage, presumably the work of Boudicca.  These buildings appeared to be around a crossroads and finds suggested that they included a general store, bakery, carpenter, jeweller and textile mill.

Over time the character of the buildings along the river bank changed. Where there were once houses a circular domed structure with wattle walls lined with clay and brick has been found – perhaps a bread oven? – and also an animal pen. During the 2nd century the whole area seems to have been redeveloped to create an industrial complex which appears to have included a watermill. Although the building itself was probably outside the area of the most recent excavation huge timber piles have been uncovered which had been driven through earlier small buildings. These piles supported a massive concrete floor and a building which was possibly two or three storeys high. The discovery of cogs, pulleys and lantern gear offers further evidence that it may have been a mill. The machinery would have controlled the direction in which the mill mechanism moved, shifting it from a horizontal motion to vertical turning. The 1994 excavation found over 1000 fragments of quernstones in nearby Queen Victoria Street and during excavations in the 1860s, prior to building the magistrates’ court, huge quantities of burnt grain where found. Together these finds offer strong evidence for a mill. Presumably the grain was shipped up the Walbrook and processed into flour to feed the growing population of Londinium. 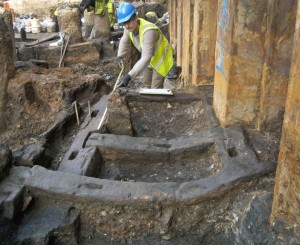 In the120s AD there was a great Roman fire of London which laid waste to the area destroying the mill and the industrial complex. By the end of the 2nd century the former industrial area was being redeveloped as a desirable place to live.  Evidence has been found of spacious houses with stone extensions, mosaic or flagstone floors, and porticos. At least one house had a bath block and hypocaust with a hot plunge pool. The Romans recycled; some of the tesserae from the mosaic floors consist of clipped down roof tiles or ridged flue tiles from a hypocaust and even pieces of pottery.

The internal walls of the houses were sometimes plastered and sometimes left as bare timber or filled with wattle or planking. Plaster fragments suggest that the fashion in the 1st and 2nd centuries was to paint the plaster with a different coloured border but the decoration in the later, more luxurious homes included mythological scenes and portraits.

The objects which have been found offer evidence of wealthy lifestyles.  These include fragments of wooden furniture such as legs, spindles, lion paw table supports and fancy cabinet doors, many of which are unique because the water logged conditions have enabled the preservation of objects not found elsewhere in the Roman empire. One novelty is a sea sponge mounted on a stick and kept in vinegar – the Roman equivalent of toilet paper. Other items include oil lamps made in the Lyons area, objects of amber and high status tableware.

As well as housing the banks of the Walbrook also supported a variety of industrial processes. One was metal working. Metal finds are often well preserved in waterlogged conditions because the lack of oxygen means that there is little corrosion but objects are often found in pieces.  An unusual metal find has been six pieces of copper alloy decorated in red, white and blue enamel which would have formed part of a hexagonal flask used for perfumes, oils or unguents. The decoration is similar to the Celtic art of Britain. Only about a dozen are known from the whole Roman Empire and nearly all those have been found in Britain suggesting that this British influenced design was made here and exported. Other metal finds include copper-alloy sheets and miscast and incomplete metal objects such as enamelled mounts, military belt buckles and fitments for armour. A small head of the god Bacchus, cast in one piece, probably came from a Roman vessel called a “trulleum”, a pan with a handle looking rather like a modern saucepan. It was probably imported from Italy.

Excavations in the Walbrook valley in 1999 provided the first evidence of large scale Roman pottery production in the area. On that occasion at least six pottery kilns, workshops and associated features were found from the 2nd century. Also found were rare ceramic vessels of unusual shapes which contained residues suggesting some kind of industrial process. The recent excavations found broken moulds for ceramic oil lamps suggesting that they were manufactured here too. Such lamps were very fashionable after the Roman conquest. Similar lamps were found at a workshop in Roman Colchester. These objects would have been easy to transport away from the Walbrook valley by boat. 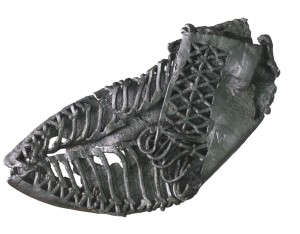 The water also preserved fabric and leather goods. Soft furnishings, bags, wicker baskets and rope have been found together with the largest quantity of Roman leather ever found in London. This includes 250 shoes, not just caliga, the sandal-like boot associated with the military, but flip flops, cork soled shoes to protect the feet from the heat of a hypocaust, and slippers or shoes with enclosed toes. Until now it had been assumed that Londinium was mostly a male, military society because most of the Roman cemeteries seem to have held male bodies. But these shoes are in all sizes for children as well as adults so there must have been families living here too. And they made shoes from recycled materials; the seams of leather panels were trimmed to make sandals. 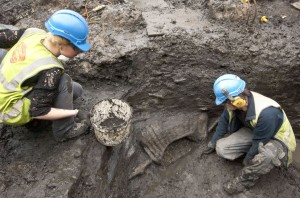 The other major group of finds has been of writing tablets. The wooden frames were made from silver fir, each page measuring about 140x110mm with a recess to hold black wax. They were bound in pairs with a cord, with the wax facing inwards to protect it. The message was scratched with a copper inlaid iron stylus to remove the wax and leave white wood exposed so the message would appear as white text on a black ground. A flat scraper was used to remove unwanted text. The wax has not been preserved but sometimes it is possible to read words scratched into the wood. 350 fragments of writing tablets have been found and it is hoped that it will be possible to read some of the messages.

The excavations in Bloomberg Place continued until the archaeologists hit London clay. No finds were made of objects between the 4th and 9th centuries. By the 4th century the area was in decline as the Romans abandoned Londinium and Britain. The Walbrook returned to its natural course and protected what remained of the Roman occupation until these fascinating discoveries were made1700 years later.