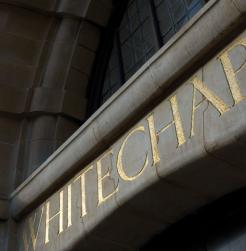 For over a century the Whitechapel Gallery has premiered world class artists from modern masters such as Pablo Picasso, Jackson Pollock, Mark Rothko and Frida Kahlo to contemporaries such as Sophie Calle, Lucian Freud, Gilbert & George and Mark Wallinger. With beautiful galleries, exhibitions, artist commissions, collection displays, historic archives, education resources, inspiring art courses, Café/Bar and Bookshop, the Gallery is open all year round, so there is always something free to see. It is a touchstone for contemporary art internationally, plays a central role in London’s cultural landscape and is pivotal to the continued growth of the world’s most vibrant contemporary art quarter.

A landmark exhibition tracing a century of Abstract art from 1915 to today, major solo shows for artists Christopher Williams and Emily Jacir, and The London Open triennial exhibition showcasing art being made across the capital will all go on display at the Whitechapel Gallery next year.

In January over 100 works by 80 modern masters and contemporary artists including Carl Andre, David Batchelor, Dan Flavin, Andrea Fraser, Piet Mondrian, Gabriel Orozco, Hélio Oiticica, Aleksander Rodchenko, Sophie Taeuber-Arp, Rosemarie Trockel, Theo Van Doesburg and Andrea Zittel will fill six spaces across the Gallery. Adventures of the Black Square: Abstract Art and Society 1915 – 2015 (14 January – 6 April 2015) takes a fresh look at this new art for a modern age, and asks how art relates to society and politics. As well as following the rise of Constructivist art from its revolutionary beginnings amongst the avant-garde in Russia and Europe, the exhibition sheds new light on the evolution of geometric abstraction across the globe including Asia, the US and Latin America. The show includes paintings, sculptures, film and photographs spanning the century, and is curated by Iwona Blazwick, OBE, Director and Magnus af Petersens, Curator at Large, Whitechapel Gallery.

This spring, the Whitechapel Gallery presents the first major UK retrospective of leading American conceptual artist Christopher Williams (b. 1956) who works primarily in the medium of photography. The exhibition from 29 April – 21 June 2015 surveys Williams’ 35-year career, exploring the function of photography in today’s consumer society. His highly produced, glossy images question the communication mechanisms and imagery that influence our understanding of the world around us. Williams employs, as material, various methods of display such as exhibition design, publicity, and books in his work. Williams will design the layout of the exhibition, drawing upon historical displays that have previously taken place at the Whitechapel Gallery.

The Whitechapel Gallery’s triennial exhibition The London Open (14 July – 6 September 2015) showcases some of the most dynamic and engaging work being made across the capital. The Gallery’s open submission exhibition started in 1932 as the East End Academy and has previously featured work by celebrated artists in the early stages of their careers from Antony Gormley, Cornelia Parker and Rachel Whiteread to Pio Abad, Alice Channer and Ruth Proctor.  Open to all artists in London over the age of 26, the call for entries starts in September 2014.

The first UK survey of multimedia artist Emily Jacir will go on show at the Gallery from 30 September – December 2015. Known for her reflective works of art that are both extremely personal and acutely political, a highlight of the show is the UK premiere of Material for a Film (2004-ongoing) winner of a Golden Lion Award at the 2007 Venice Biennale and Hugo Boss Prize (2009).

Further exhibition highlights for 2015 include Glasgow artist Corin Sworn’s new work inspired by the Italian Commedia dell’arte for the Max Mara Art Prize for Women in collaboration with the Whitechapel Gallery (28 May – 19 July 2015), as well as new commissions, collection and archive displays, talks and events across the Gallery. The full 2015 programme for the Whitechapel Gallery will be announced in the autumn.