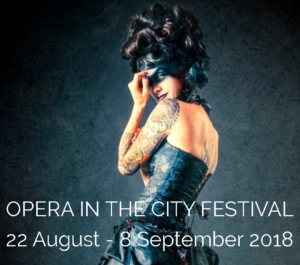 at Bridewell Theatre, City of London.

For the second year, Time Zone Theatre Ltd in collaboration with the Bridewell Theatre presents Opera in the City Festival. The boutique festival focuses on rarely performed classics and new, experimental works by emerging British and international artists. This year’s highlights include the in-house season UNDERWORLD with Orpheus and Eurydice by Christoph Willibald Gluck (1714 – 1787) and Faust, Alberta, by award-winning composer Simone Spagnolo with a libretto by Giordano Trischitta, which has been commissioned by Opera in the City Festival and will receive its world premiere on 3rd September 2018.

The operatic spectacle Faust, Alberta explores the tragic story of Doctor Faustus and his fatal deal with Mephistopheles from a contemporary angle. A Nameless Man finds himself in a remote cabin in the wilderness. He doesn’t know who he is nor where he is from, only that something is after him – an unstoppable machine that hunts those who fell from grace. In nine scenes, he tries to collect his memory. Triggered by snippets from his past, he slowly starts to put the pieces together. The “music-theatre metaphysical western”, as composer Simone Spagnolo and librettist Giordano Trischitta describe their new work, is scored as a mono-opera for one singer and four musicians, and inspired by Wim Wenders. It asks whether we can ever escape from our past, and how to find redemption.

The role of Doctor Faustus will be sung by Benjamin Bevan, whose engagements include Henry Cuffe in Britten’s Gloriana and Der Sprecher in Zauberflöte (Royal Opera House), Lescaut in Boulevard Solitude by Henze (Royal Danish Opera and Welsh National Opera), and work with BBC Philharmonic Orchestra, among many others.

This opera will be contrasted with a revival of Christoph Willibald Gluck’s Orpheus and Eurydice, which was composed roughly 250 years earlier in 1762. Gluck’s opera is based on the Greek myth of Orpheus, who – unable to accept the death of his beloved wife Eurydice – descends into the Underworld to bring her back. Moved by his pleas, the Spirits grant him permission, but there is one condition: while leading her out of Hades, he must not turn around and face her. The timeless love story will be presented as a modern fairy-tale in a new, English translation and with a musical arrangement for piano, violin, flute and harp by musical director Andrew Charity.

Both productions of this season will be directed by Pamela Schermann (Mozart & Salieri at Arcola Theatre & UK/Denmark Tour, Raving Royal Birmingham Conservatoire, Othello Rose Playhouse and NYC, among works in Germany and Austria), with a set and costume design by Cindy Lin (Linbury Prize Finalist / Royal Court Theatre and ROH Bursary recipient) and lighting by Petr Vocka.

Visiting companies at Opera in the City Festival 2018

Strong female stories take centre stage in our further festival programme. Ayanfe, A Yoruba Opera by April Atinuke Koyejo is inspired by her own ancestry and the desire to bring the Yoruba culture to the operatic stage. The multi-disciplinary work with music composed by Pierre Audiger takes inspiration from folklore, with an honest yet exciting rendition of Yoruba folk music reimagined in a western classical style. British-American soprano Kathryn Frady presents UK premiere of the one-woman opera Amelia Lost by Larry Delinger, a haunting and inspirational story about a homeless woman who believes herself to be aviation pioneer Amelia Earhart.

And there’s still more. The film screening Opera Shorts embraces the collaboration of opera and film with a selection of shorts from various countries and cultures, presented by Everyday Arias. Last but not least, Lunchbreak Opera brings their fast-paced take on Antonio Salieri’s rarely performed Prima la musica to Opera in the City Festival.

“Opera in the City Festival feels like the place to be” – Culture Whisper, 2017

“Bound to become a staple of London’s classical music scene” – Everything Theatre, 2017

“There’s plenty of variety to tempt any opera goer looking for the unusual” – Bachtrack, 2017

“Deserves praise for looking beyond the obvious and for providing London with a further August alternative to the Royal Albert Hall“ – Opera magazine, 2017